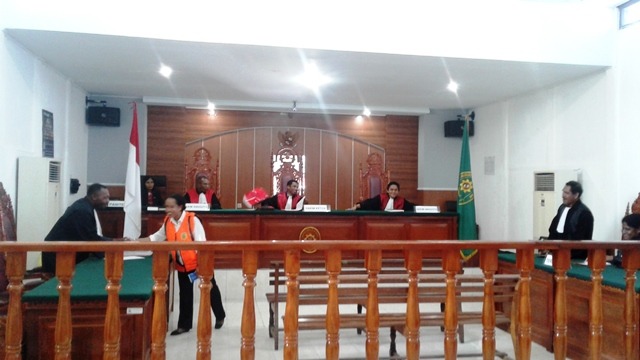 The Defendant Sayang Mandabayan during the first trial at the Manokwari District Court with the agenda of the indictment reading by the prosecutor. -Jubi/Hans Arnold Kapisa

In the indictment, the public prosecutor from the Manowari District Attorney General Benoni A. Kambado indicted the defendant Sayang Mandabayan participating as an orator in the anti-racism protest in Sorong City on 19 August 2019 which ended in chaos.

Furthermore, he appointed that with the same intention, the defendant left for Manokwari on 3 September 2019 to attend the similar protest on the same day. However, the police and airport security officers arrested her and seized her luggage at Rendani Airport, Manokwari.

The public prosecutor also mentioned in the indictment that, with her own initiative, Mandabayan had prepared 1,496 miniatures of morning star flag made by paper and stick, 4 pieces of white t-shirts with monkey images and 3 reams of printed song lyrics ‘Dari Ombak Besar’ and ‘Hai Tanahku Papua’.

Meanwhile, Mandabayan’s legal counsel Metuzalak Awom said he would file an objection against the indictment, given that the location of the trial and the place of detention against his clients are under the jurisdiction of Manokwari.

“We will submit an exception because of the facts mentioned in the indictment were not match with the locus (place) of the incident,” he told Jubi on Thursday (13/2/2020) in Manokwari.

Furthermore, he considered there was an attempt of criminalisation against his client by connecting the incident in Sorong with the arrest of Mandabayan at Rendani Manokwari Airport.

“Whether it would be accepted or not, our exception would clearly be an early indication to the prosecutor’s indictment before we are going into the substantive matter,” he said.

In the meantime, the panel judges chair Faisal Kossah approved the request of Mandabayan’s attorney to conduct an exception.

“We suspend the hearing until next week on 20 February 2020 with the agenda of hearing the exception by the legal counsellor on the prosecutor’s indictment,” concluded Faisal. (*)