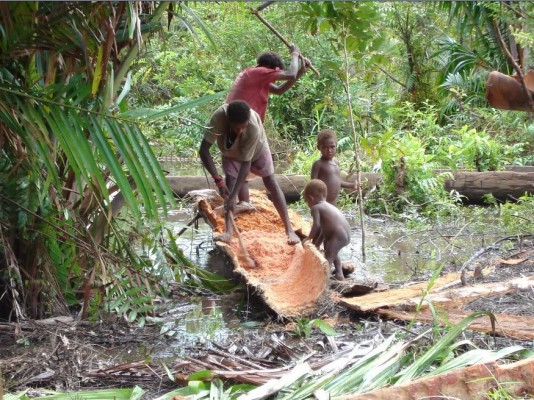 Sentani, Jubi – Jayapura Regent said sago remained the main commodity in Jayapura Regency despite the increase in rice consumption in the regency. He said sago is Papuan staple food that has become the representation of Papuan authenticity.

“In line with declaration of the revelation of Customary Law Community, sago is integrated; instead it existed before the Regional Government’s declarations about the local wisdom,” the Regent Matius Awoitau in Sentani on Sunday (15/5/2016).

He said to the former regent has established a regulation in order to protect sago as a local commodity. Besides the Regent Regulation, the Regional Regulation has been made to protect the sago forest in Jayapura Regent. Therefore, it is important for the local people to keep maintaining and protecting their sago forest. But the most important is sago has the high economic value instead of the source of food, because people sell it at every traditional market in Jayapura Regency.

“This local food must be protected and developed to create as well as improve the diversification of local food,” he said.

Sago seller Jeni Mokai at Pharaa Sentani traditional market said sago purchase rate at the market is very high. “It consumes 1 to 2 rice bags of the size of 50 Kg a day. Usually the sago sellers in Jayapura city buy it with the price of 500 to 700 thousand per sack. While the profit could reach 1.2 million per sack for Rp 20,000 per piece,” said Jeni Mokai. (Engelbert Wally/rom)

226 THOUSAND HECTARES OF FOREST IN PAPUA WILL BE “CLEARED”

MPs Questions over Failure to Materialize 14 Seats for Indigenous Papuans