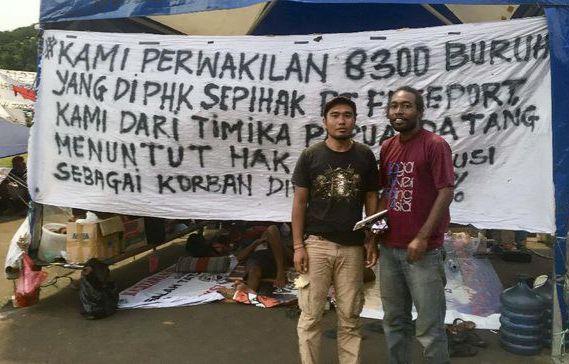 For exactly four days scores of former PT Freeport Indonesia employees have been camped out opposite the State Palace in Central Jakarta. -CNN Indonesia

Jakarta, Jubi – For exactly four days scores of former PT Freeport Indonesia employees have been camped out opposite the State Palace in Central Jakarta. Sleeping under tents made from tarpaulin, the employees who were sacked by the Freeport gold-and-copper mine in 2017 are sleeping over with whatever equipment they have available.

One of the former employees, Jerry Yerangga, admitted that he had intentionally chosen to stay overnight opposite the Palace along with his colleagues so that they could meet with President Joko “Jokowi” Widodo.

“We are calling in [his] promise because we have already met with a majority of senior state officials. We feel that we have not obtained justice because of being sacked by Freeport”, said Yerangga when speaking with CNN Indonesia on Saturday February 9.

Yerangga said that the dismissals began during the polemic over the divestment of Freeport shares to the Indonesian government prior to an agreement being reach in late 2018.

The former Freeport dump truck operator said that Freeport sacked around 8,300 employees. “They felt they had suffered financial losses because of problems over the share divestment with the government at the time”, he said.

Yerangga said that they have already held a number of actions in Papua however their protests have been opposed by security forces. In July last year he and his colleagues finally decided to take a ship to Jakarta to continue their protests.

“But to this day there has been no clarity, the only parties which have been able to respond to our problem were the Ombudsman and Komnas HAM [National Human Rights Commission]”, said Yerangga.

In the end, Yerangga decided to camp out in tents in order to find a quick resolution to the problem. Over the last four days, he and 50 other colleagues have slept under tents.

They have been bathing at public toilets at the National Monument (Monas) in front of the State Palace. He is grateful because government officials and police have not prohibited the protest.

“We are grateful because here official have allowed [the protest]. We can freely convey our wishes here”, he said.

Yerangga hopes that the government will immediately follow up on their complaints although he does not know how long they will have to keep living under the tents.

“Until we get a response. Have pity on our children who can’t go to school, [or those] who have had to sell their homes to cover daily living costs”, said Yerangga.

Freeport spokesperson Riza Pratama said earlier that the thousands of former employees had been deemed to have resigned because they were absent from work.

“We followed procedures, summoned them. There as a total of around 3,500 [employees] who went on strike and failed to meet their obligations. Then, there were around 200 of them who obeyed our summons, the rest didn’t. So we deemed that they had resigned. In accordance with regulations, they were given one month’s wages [severance pay] which was transferred to their individual accounts”, said Pratama in March 2018.

The dispute with the employees however was not resolved there. It was only on December 21, 2017 that the company, the trade union and former employees, witnessed by related parties from the Ministry of Labour, were offered a new solution. (*)