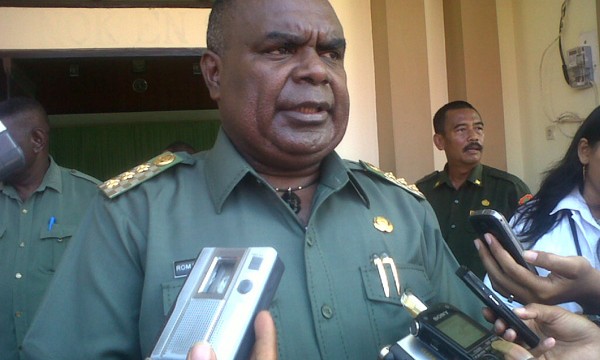 Mbaraka said on Monday (17/08/2015) eight households live in Rawa Biru village.
“At that time I wanted to draw them in at Rawa Biru village. Only it did not run well because there is the question of ownership of customary land rights, “he said.

Thus, he planned to make transmigration program for them where local government will set up an area of ​​two hectares and build housing.
“Today I am going to the village to attend the ceremony of the 70th Anniversary of Indonesia and conduct a direct dialogue with the community, in order to hear the difficulties faced, “he said.

“Again I denied about the rumors that residents lowered down the Red and White flag by communities around Rawa Biru. I have a brother who lives there and reported that there was no incidence of lowered flag. “he added.

Head of Sota district, Mike Walinaulik stated ocal government has given its attention to the people in the villages through various programs such as PNPM Mandiri / Respek program. (Frans L Kobun/ Tina)

PROVINCIAL GOVERNMENT READY TO BE AUDITED BY BPK

The trial ‘Bible burning’ case will be conducted openly

Tabi Province, for whom it established?