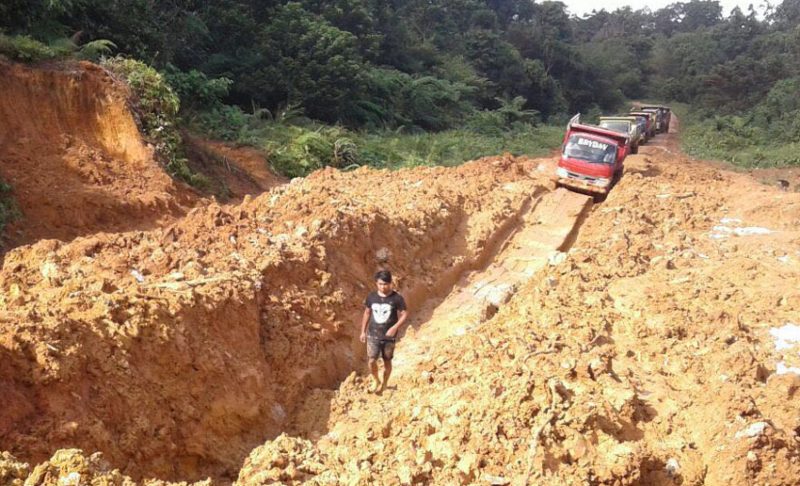 Residents in Mindiptana have been isolated after a crossroad connecting Mindiptana and Tanah Merah, Boven Digoel Regency was covered by two-meter high mud that is also hurting the local economy - Jubi/Ans K

Residents in Mindiptana have been isolated after a crossroad connecting Mindiptana and Tanah Merah, Boven Digoel Regency was covered by two-meter high mud that is also hurting the local economy – Jubi/Ans K

Jayapura, Jubi – Residents in Mindiptana have been isolated after a crossroad connecting Mindiptana and Tanah Merah, Boven Digoel Regency was covered by two-meter high mud that is also hurting the local economy.

A taxi driver for Merauke – Boven Digoel route, Riski, told reporters that the mud has been blocking the road for two months, disrupting the activities of local residents.
“People are isolated, and basic commodity prices have increased 50 percent from the normal prices,” said Riski  in Jayapura on Wednesday (14/9/2016).
He said there are 12 broken spots at about 78 kilometers distance and there is a spot that landslide often occurred to cover the road. This condition was happened due to the high rainfall at the southern area for the last two months.
“It is raining almost everyday, it changes the bare road become muddy, so it’s not possible for the vehicles to get along. Even the asphalt road also broken due to the rainfall,” he said.
He said in normal condition, Mindiptana – Tanah Merah could be reached less than 1 hour 20 minutes by car or bike. But today, people should wait until six days. “Currently it is faster by walking. The indigenous people usually could walk in less than two or three days if they want to go to Tanah Merah or vise versa,” he said.
Mindiptana resident Kristin similarly said this condition is worried, moreover the basic commodities prices increased significantly. “It’s really affected us. The basic commodity such as rice that usually sold Rp 10 thousand per kilogram, currently Rp 20 thousand.  It is similar with the fuel price. We used to buy gasoline for Rp 6500, now it reachs Rp 15 thousand,” she said.
Concerning to this situation, she expected the government could pay attention to immediately repair the broken road, given it is only the one way to go to Mindiptana and Tanah Merah. “It is the only access for us to go to the town for buying our daily needs. If it just ignored, our life would become more difficult, goods become expensive and our activities would be destructed,” she said.
She added after the inauguration by Papua Governor, the Regent and Deputy Regent Boven Digoel never came to visit on the ground, though the road condition is worse. “Now as citizens we asked their promise they said in the election to build our village,” he said. (*/rom)
mindiptana mud

Govt to Set up Institution to Accelerate Development in Papua