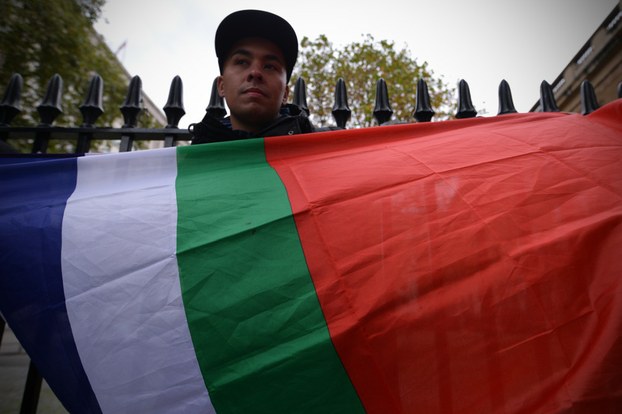 A protester holds a flag of the banned South Maluku Republic separatist movement during a demonstration against then-Indonesian President Susilo Bambang Yudhoyono in London, Oct. 31, 2012. AFP

Papua, Jubi – Police in Indonesia’s Maluku province said they have charged five suspected separatists with treason after security forces raided a house where pro-independence activists had gathered over the weekend.

Police have charged the suspects – identified as Izack Siahaya, 80, Teli Siahaya, 50, Johan Noya, 35, Markus Noya, 30, and Basten Noya, 30 – with treason, according to Julkisno Kaisupy, a police spokesman in Ambon, the main island in the Malukus.

They could face life in prison if found guilty.

“They are still being detained. The police are handling the case,” Julkisno told BenarNews.

“Installing a flag as a political expression is not a crime. Political activists who carry out their acts peacefully, including those who support independence, have the right to express their political views,” AI researcher Papang Hidayat said in a statement.

“The police must immediately and unconditionally release them and guarantee freedom of expression for the people of Maluku,” Papang said.

AI said the suspects in detention were not accompanied by a lawyer.

Julkisno declined to comment on AI’s call for the suspects to be released, but said they were accompanied by a lawyer appointed by police.

A local activist said the flag was displayed inside the house.

“From the aspect of human rights and legal rights, there is no justification for police to arrest or punish the five people, even more so that the reason for the arrest was simply the display of an RMS flag inside the house,” Johanis L. Hahury, chairman of the Maluku Human Rights Advocacy Institute (LIAMMA), told BenarNews.

A group of Maluku nationalists proclaimed the RMS on April 25, 1950, after a treaty between the Dutch and the Indonesian governments for a federation of Indonesian states was broken.

The RMS rebellion was defeated by Indonesian forces later that year, but a low-level armed insurgency continued until 1963. The RMS leadership went into exile in the Netherlands in 1966.

In 2007, police arrested 28 pro-independence activists who performed a cakalele war dance and unfurled a separatist flag in front of then-president Susilo Bambang Yudhoyono during a ceremony to mark National Family Day in Ambon.

The activists were sentenced to between 15 and 20 years in prison.

Human Rights Watch has alleged that some of the prisoners were subjected to torture and other ill-treatment.

Last year, Indonesian authorities moved six of the prisoners from Nusakambangan, a penal island for hardened criminals off the coast of Java island, to a prison in Ambon, Maluku’s provincial capital.

They have refused a government offer of pardon, insisting that they are not guilty of any crime.

Amnesty said the government of current President Joko “Jokowi” Widodo had released 60 “prisoners of conscience” in rebellious Papua province and Maluku since he took office in 2014.

“In recent years, Amnesty International has noted that the number of political activists in Papua and Maluku prosecuted on charges of treason has been decreasing,” AI said. (*)