Jayapura, Jubi –  Papuan human rights defender Victor Yeimo, who is arrested by the police for allegedly provoking riots in the antiracism protests in 2019, is reportedly not in good health. Rights activists and the Papuan public are concerned if Yeimo does not get the proper health treatment in the prison.

“He had a blood cough a few days ago. He also suffers weight loss and chest pain. We suspect it’s a lung problem,” one of Yeimo’s lawyers, Gustav Kawer of the Coalition for Law Enforcement and Human Rights for Papua said after visiting Yeimo on Monday, August 9, 2021.

Ever since Yeimo’s arrest in May to date, his health condition has been steadily deteriorating but he only received two examinations. He was first examined on May 17 at the Papua Mobile Brigade headquarters (Mako Brimob), then on June 17 in the Bhayangkara Hospital. However, Emanuel Gobay of the Coalition for Law Enforcement and Human Rights for Papua said they were merely general check-ups.

“We consider the fulfillment of Yeimo’s right to health is not optimal,” Gobay told Jubi on Tuesday.

Read also: I was not there: Victor Yeimo denies involvement in protest turn riots

Meanwhile, head of Papuan Legislative Council (DPRP) Jhony Banua visited the Papua High Prosecutor’s Office on Tuesday, demanding the body to ensure that the rights of Victor Yeimo as a defendant are fulfilled. According to Banua, a group of people has submitted to the council their aspirations on ensuring Yeimo’s health.

Jubi’s team also tried to visit Yeimo at the Mako Brimob on Tuesday but to no avail. The fruit basket we had prepared for Yeimo was stuck in the lobby. It was 14.27 p.m. when a police officer who refused to be named told us we could only see Yeimo with permission from the prosecutor’s office. We decided to left the lobby. 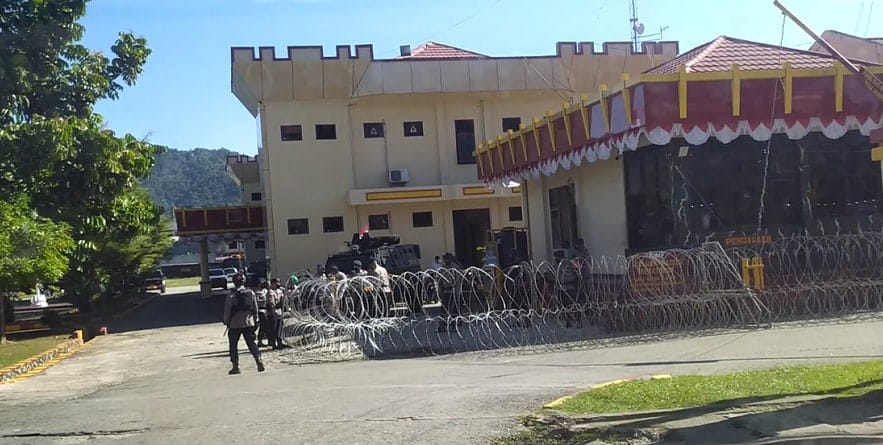 At 16.15, Sumule and Daimboa returned to the parking lot. Jubi tried to get information about Yeimo’s condition from Sumule but he said he did not do the examination. “It was doctor Grace who examined [Yeimo], I didn’t,” he said while rushing into his vehicle.

Daimboa also got into her vehicle which was parked next to Sumule’s car. There were also two female health workers wearing masks, headgears, and bluish-green surgery uniforms, already sitting in the middle seat of Daimboa’s car. The doctors left the Mako Brimob.

Jubi tried to call Daimboa but she declined Jubi’s request to comment on Victor Yeimo’s illness on the pretext of respecting the medical code of ethics.

“The patient’s history cannot be disclosed by the doctor, it can only be conveyed directly by the patient,” said Daimboa, while asserting, “[the visit] was just a regular check-up, an external check-up”.

Although Sumule and Daimboa have kept their mouths shut about Yeimo’s health, the head of the Papuan High Prosecutor’s Office, Nikolaus Kondomo, confirmed Yeimo’s unwell condition.

“Today we brought the defendant for a medical examination at the Jayapura Regional Hospital, accompanied by the prosecutor and other officers,” Kondomo told reporters in a zoom meeting on Tuesday afternoon.

Lawmaker Namantus Gwijangge of the DPRP’s Commission V for People’s Welfare and Social Culture expressed his concern about Yeimo’s deteriorating health. From various sources he received, it was reported that even Yeimo’s family members were not allowed to visit Yeimo even with Yeimo complaining about getting sick.

Gwijangge, who is also the deputy of the DPRP’s Humanitarian Special Committee, said he had received reports that there was a sense of distrust toward the health services provided by the security forces inside the prison. He suggested Yeimo be returned to his family and treated by specialist doctors with family assistance and legal counsel while being supervised by the authorities.

“As a representative of the Papuan people and the Humanitarian Special Committee, I would like to convey to the High Prosecutor’s Office that before the legal proceedings, we must prioritize the health of Victor Yeimo. If he is healthy, he can follow the legal process properly,” Gwijangge said.

United Nations Special Rapporteur on Human Rights Defender Mary Lawlor said her party is currently monitoring Yeimo’s health. “I am hearing disturbing reports that Human Rights Defender from #WestPapua, Victor Yeimo, is suffering from deteriorating health in prison. I’m concerned because his pre-existing health conditions put him at grave risk of #COVID19,” she tweeted on Tuesday.