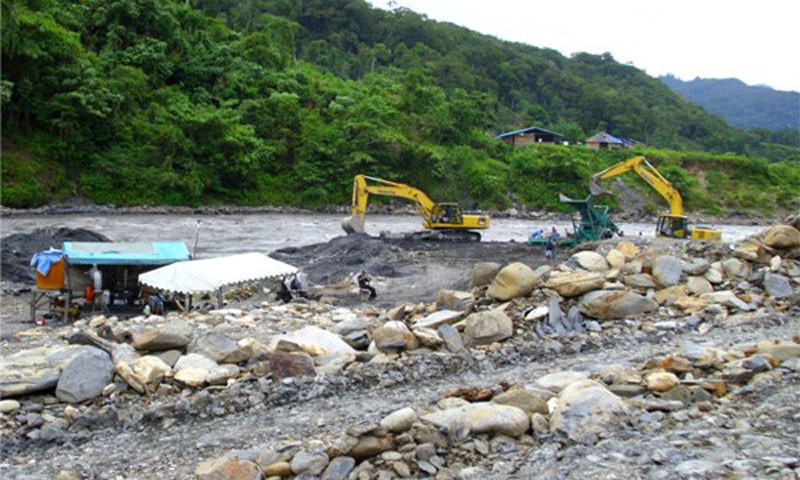 The local people found out about it after a report said a police general who had been allowing the company to continue its operation employed a number of Mobile Brigade personnel of Papua Police.

“In Degeuwo, a retired police officer, a former Inspector General has been came up, while he was known involving with humanity issue. In our record, he held many important positions in the Indonesian Police Headquarters, including as the Coordinator of the Social Economy Experts of the former Indonesian Police Chief, General (retired) Sutarman in 2013,” Gobai told Jubi on Sunday (25/10/2015).

For that reason, he asked the Papua Police Chief Inspector General Paulus Waterpauw to immediately withdraw the Mobile Brigade personnel who guard around the illegal mining area located in the customary territorial of three tribes, Wolani, Mee and Moni. “The Police officers and Mobile Brigade personnel were actors behind the shooting incident over Melianus Kegepe, Mathias Tenouye and Selpius Kegepe. The bullets were belong to Brimob,” he said.

He further said the Papua entrepreneurs and traders would ready to lead the gold companies in Papua, such as PT. Salomo Mining. While PT. Madinah also less contribute to the local government and indigenous people in providing economic benefit.
“A good resolution for Degeuwo is the Paniai Local Government coordinates with the Papua Provincial Government to determine the people’s mining area as proposed some times ago. The Papua Governor has approved that WPR could accommodate the entire group as well as to assure all interest. Then, the People Mining Permit (IPR) would be issued on behalf of the land tenure owner to ensure the indigenous people to become the landowner or permit holder. So the mining workers work under the supervision of indigenous people and LPMA SWAMEMO would become their coach,” he said.

The Chairman of LPMA SWAMEMO (Walane, Mee and Moni Community Development Institution), Thobias Bagubau said LPMA will collect the aspiration of people living surrounded the illegal mining area along the Degeuwo River, Paniai Regency. The socialization to collect the people’s aspiration was held on 21 – 30 September 2015 in the illegal mining areas, from block 45, 81, 99, Baya Biru to Gunung Botak.
“At that time we held a meeting with the indigenous people involving the tribes of Wolani, Mee and Moni and other tribes such as Dani, Sengir Talaud, Buton and Makassar to listen their testimonies,” Thobias Bagubai told Jubi in Abepura, Jayapura City on Thursday (22/10/2015). On that occasion, Bagubau said, he revealed his vision and mission in order to maintain or protect the environment, community and to reduce the conflict in there. (Abeth You/rom)

Local leaders are looking for conflict resolution in Papua

No More Other Team to Investigate Paniai Case