‘Resignation’ movement feared to spread throughout the conflict areas 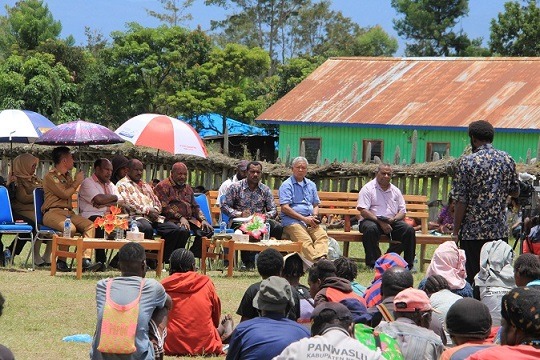 Illustration of the meeting between the regent and deputy regent of Nduga in the yard of Kingmi Church, Weneroma Congregation together with the people who sought refuge in Wamena. - Jubi / Islami

Illustration of the meeting between the regent and deputy regent of Nduga in the yard of Kingmi Church, Weneroma Congregation together with the people who sought refuge in Wamena. – Jubi / Islami

Jayapura, Jubi – Following the resignation of a local government official in Nduga, youth activist Benyamin Gurik expressed his concern that the same action would raise throughout the conflict areas if the central government does not change its approach in solving problems in Papua.

“I strongly believe that the act of the former deputy regent of Nduga will inspire all conflict areas. Even all legislative and executive members will take the same action in favour to attract global attention,” said Gurik on Tuesday (12/24/2019).

Further, he said if all leaders in the conflict area decided to resign from their position, it would cause new problems which intricate the central government.

“Therefore, I suggest that the central government to immediately change its approach in solving the conflict in Papua by adopting the non-violence approach,” he added.

He hopes the central government would immediately withdraw the military troops from all regions in Papua as it has only increased the human right violations against indigenous Papuans and ruined the reputation of the Government of Indonesia in the international community.

Moreover, Gurik encouraged the government to immediately open a peaceful and dignified dialogue as suggested by LIPI (the Indonesian Institute of Science) and JDP (the Peace Papua Network).

“Only a peaceful dialogue could bring peace to the people and avoid victims from both sides, military and community. Therefore, peace would be through upon us all,” said Gurik.

Mahfud MD, the Coordinating Minister for Political, Legal and Security Affairs, ensured that problems in Papua would be comprehensively resolved with some approaches during the discussion ‘Chat with the Media’ held in Bakso Boedjangan, Jakarta, Thursday (12/26/2019).

“The government, as conveyed by President Joko Widodo, will conduct some comprehensive approaches towards the problems in Papua, in particular, the economic approach. Meanwhile, the cultural, educational and legal approaches would be more synergised given it requires huge financial resources,” said Mahfud.

However, he said, the security approach must be kept to protect the people. According to him, it is impossible to exclude the police in terms of security.

“Even a country as safe as New Zealand set their police officers everywhere. Why do we not be allowed to use the security approach? If not, it is not a country,” he said.

Moreover, he said the security approach aims to protect and ensure the welfare of the people. He also stressed that the government’s attitude towards the problems in Papua refers to the international conventions.

“UN Resolution 2504 of 19 November 1969 stated that Papua is a legitimate part of the Republic of Indonesia. Then, when a movement or separatism arose, we have to face it. Separatists should recognise as separatists, aren’t they?” said Mahfud.

Then, this former Chief of the Constitutional Court also mentioned about the protection for the community at the grassroots level; those who know nothing but often brought into difficulties and troubles, they must receive legal and human rights protection. (*)

West Papua has the first native woman as a head prosecutor

THE DELEGATION OF MSG MUST CONVOKE THE CIVILIANS OF PAPUA

ALLEGED KILLER OF AIRMAN FLOWN TO JAYAPURA FOR QUESTIONING

MRP should be Disbanded if Involved in Politics