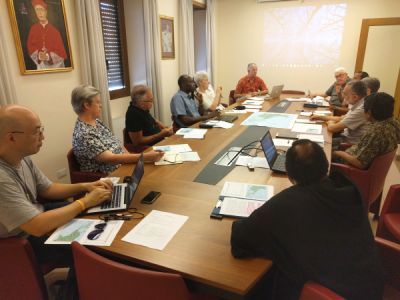 Roma, Jubi – 13 religious men and women, representing 7 religious congregations (including SSpS and SVD) gathered on 10 July at the Generalate of the Augustinians in Rome to discuss collaboration for the promotion of human rights in West Papua.

Most of the congregations are present in West Papua, working on various ministries.

They concluded that in West Papua, on the eastern end of Indonesia, the indigenous population has been suffering human rights violations in the areas of freedom of expression and freedom of assembly.

The indigenous have low standards of health and education, for Indonesia, and experience economic marginalization and land grabbing. There is military oppression in the form of torture and killings.

The participants heard from a West Papuan religious, and an expert in the defense of human rights of West Papuan people in international level. Sr. Sheila Kinsey, the Executive co-secretary of the JPIC Commission of USG/UISG also joined and expressed the importance of networking.

After hearing from them the participants shared their thoughts about the need to be proactive as religious congregations.

The meeting acknowledged that the history of West Papua and its current situation is quite complicated and sensitive, but the desire of the congregations is very simple – to accompany the indigenous West Papuan people in the promotion of human rights.

The congregations have decided to form a network in Rome to share information, to improve networks and relationships in West Papua, particularly in health and education ministries, to raise awareness and train their members, and to network with religious NGOs.(*)

Three years of MIFEE (part 1): A Growing Movement Against Plantations in West Papua

Vanuatu Church: MSG Is For Melanesians Only