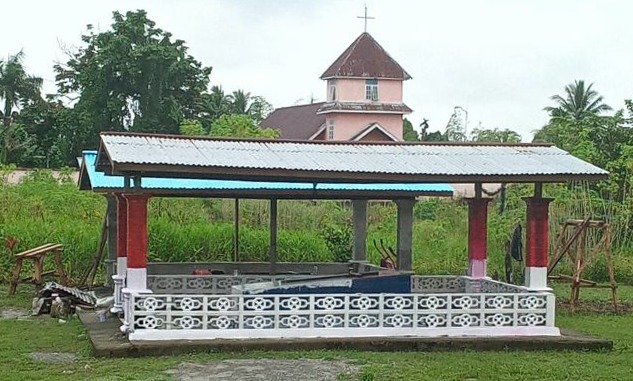 The grave of a leader of the National Liberation Army Kelly Kwalik in Timika, Mimika Regency is now painted in red-white colours. – IST

Jayapura, Jubi – The repainting activity on the grave of Kelly Kwalik by the Police is to shift their action to dissolve the worship ceremony on Thursday (19/9/2019). It is also considered hurting the sense of justice among Papuans.

The Rev. Deserius Adii, the Justice and Peace Department Chief of Kingmi Church for Puncak Selatan Region, asserted that the security forces in Timika repainted the grave of Kelly Kwalik, a leader of West Papua National Liberation Army into red-white colours. Further, he considered the repainting by the security forces to shift the issue of forced dissolution against the local community by the Mimika Police on Thursday.

“Kwalik’s grave was painting with the colour of morning star because he died to fight for justice and peace for his people. But the security officers repainted it with red and white,” Adii told Jubi on Friday (20/9/2019).

Also, the police did it after they dissolved the workship ceremony involving Papuan students who returned from other Indonesian cities and towns, he said. However, he assumed the police had planned it for quite a long time. Before the dispersion, many unknown people have settled around the grave of Kelly Kwalik.

“After the police dissolved people in the worship ceremony, the number of people around the grave was increased. Three residents arrested while watching the police did their job and took them to the Mimika Police station,” said Adii.

He further thought that the repainting of Kwalik’s grave had hurt the sense of justice of West Papuans. “Kelly Kwalik killed by the security forces because fighting for the rights of his people. Now, they repainted his grave with red-white colours. Do they ashamed of their actions or not? Adii questioned.

Meanwhile, a legal officer of LEMASA Patrick Wetipo considered the security forces had made a big mistake by dispersing the worship ceremony and repainting the grave of Kelly Kwalik. “They banned the “Bakar Batu” (stone-roasting) ceremony. It’s harassment towards the Papuan culture,” he said.

Moreover, Wetipo stated that the security forces should be responsible for the death of Kelly Kwalik, who’s shot when surrounded by the police on 16 December 2018. However, they are now changing the colours of his grave into red-white.

“Kelly Kwaling were fighting for the independence of Papuan people. The colours of the morning star are for respecting his fight. But by repainting his grave indicates that the security forces continuously showed injustice against Papuans,” he said. (*)