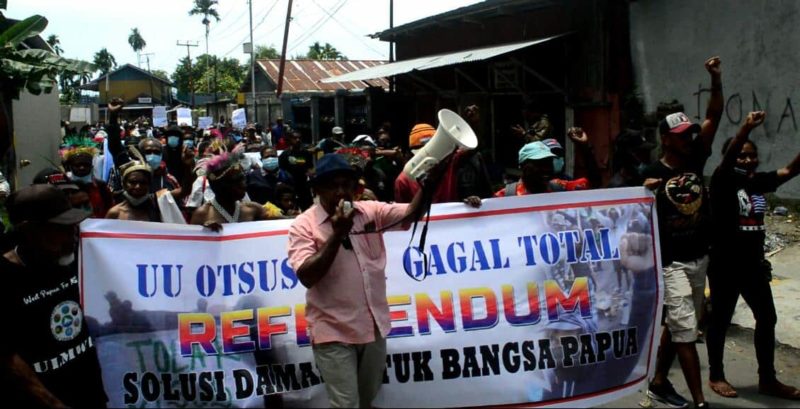 Manokwari, Jubi – Shouts of ‘Papua Merdeka! (Free Papua)’ and the unfolding morning star flag was colouring a rally by Papuan pro-independence group on Wednesday(30/9/2020) to reject the special autonomy (Otsus) in Manokwari. Joint security forces were set on location to secure the scene.

Although they were not allowed to carry out a long march, the crowd led by Markus Yenu, Governor of West Papua National Authority (WPNA) Region III Domberai, was authorised to express their protest.

“19 years of Otsus in Papua land (2001-2020) had no benefit for people on grassroots. It only benefited political elites and government officials,” declared Yenu in his oration.

This rejection, according to Yenu, was an aspiration that purely comes from Papuan people who refused to suffer for the second time, while particular individuals or groups enjoy their privileges.

Also, he suggested that the central government and its law enforcement system expose bureaucrats behind the management of Otsus fund in Papua Barat Province, considering trillions of budget were not absorbed for people on the ground but allegedly benefit particular groups of elites.

“The Indonesian Government must be able to conduct a thorough audit on the use of the Otsus fund in Papua Barat Province, which is at risk of corruption. Arrest such corrupt officials and stop the extension of this policy because it is not from people’s aspiration,” said Yenu.

In the meantime, Wilson Wader, a former political prisoner in Manokwari, said there is no future for Papua if it is still under the Republic of Indonesia.

For him, Papua cannot be ‘indonesianalised’ because of some factors. “In this occasion, I want to say that our race is different [from Indonesian] as well as our historical background. Therefore, there will be different points of view in many things among us,” he said.

Furthermore, in his oration, he told about the history of New York Agreement (15 August 1962) and Roma Agreement (30 September 1962) which he accused of not accommodating the political rights of Papuan people.

“Today protest is a reminder against the 58 years of Roma Agreement which did not involve Papuans during its process,” said Wader.

Meanwhile, the Operational Chief of Manokwari Departmental Police Edward Pandjaitan said the restriction towards the demonstration declining Otsus was not a form of oppression against the right of civilians but referring to the health protocol during the Covid-19 which did not allow mass gathering.

“We ask for the action to immediately stop referring to the instruction of the Indonesian President and Police Chief regarding the health protocol during the pandemic,” said Pandjaitan.

After having a negotiation with the police, the protesters conducted a communal prayer and returned home. (*)

14 Seats for Papuan to be Regulated Without MRP Approval