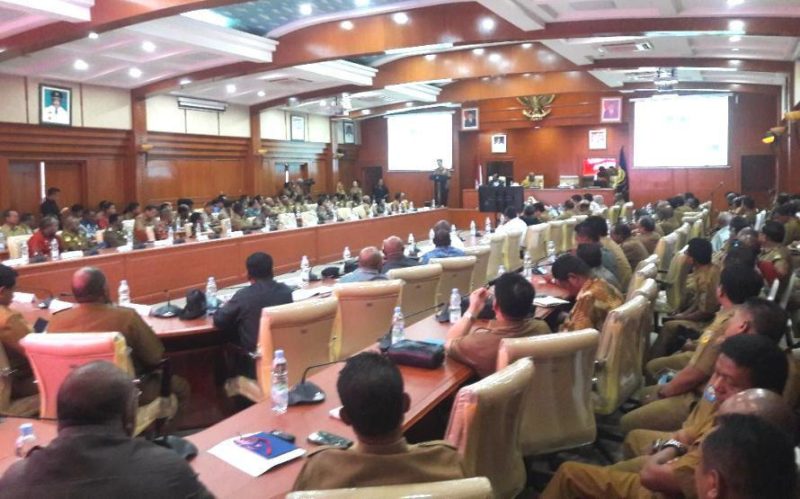 Jayapura, Jubi – Indonesia’s Corruption Eradication Commission (KPK) asked the regional heads in Papua to not misuse their positions for their benefits.

Moreover, he gave an example of the corruption case by the regents of Nganjuk, Cirebon and Klaten. They were proven to misuse their potions and accept gratification. “They can get 60 billion rupiahs in one turn. Their collectors could be their children, relatives, in-laws and others. So please do not do it,” he said.

According to him, the ‘position bargaining’ is only a term, whether you take gratification in advance or later on, it still accounts as gratification. “So no matter if you are asking for or not, once you take it, it still means gratification. So, I ask the government to take this as a reference,” he said.

In this occasion, Adlinsyah also asked the provincial, regional and municipal governments to immediately respond to the Joint Decree (SKB) of three ministers regarding the dismissal of civil servants who proved to be corrupt.

“I saw that Biak Regency had the most corruption case. So, I ask the provincial, regional and municipal to respond this SKB immediately,” he said.

Meanwhile, the Deputy Governor of Papua Klemen Tinal said the provincial government had been very responsive and fully supported the implementation of the action plan for the corruption eradication program that is reflected from a number of actions that have been implemented, including the launch of e-Government policies with the integration of e-planning, e-budgeting, e-samsat, e-licensing and e-taxation systems.

“These actions aim to minimize the potential corruption, and the more important is it will give an impact on the better governance,” said Tinal. For this reason, he invited every regional head in Papua to commit and consistently implement the corruption eradication program which designed to build a good, clean, transparent and accountable governance. (*)

Security Forces Deployment to Papua is only for Investor’s Sake

No Casualties in Plane Accident at Wamena Airport

TNI and police must not shoot Papua civilians, the blame is on us: TPNPB