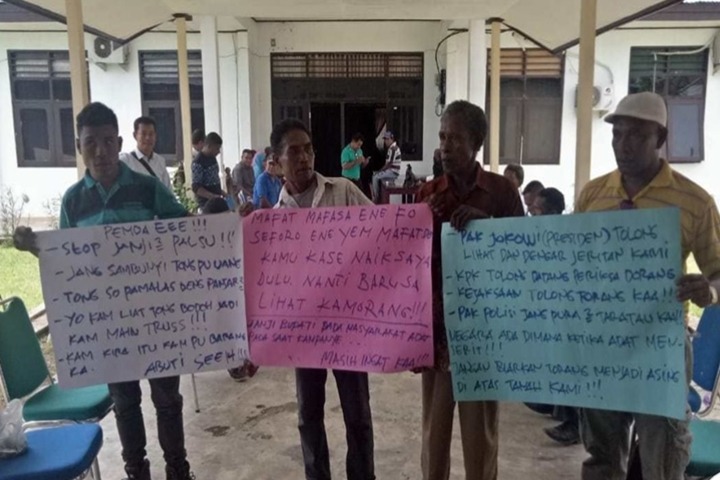 A rally held by the community of AMAN (the Indigenous Peoples’ Alliance of the Archipelago) in Raja Ampat Regional House of Representative. – Jubi/SPC

Sentani, Jubi – The landowner of 3 hectares of the customary land asks the local government of Raja Ampat to return the land and pay the rent for two-years occupation.

Following the land dispute, the customary people then brought the case to court. Here the statement declared by their legal counsel Haris Azhar from Lokataru, the Law and Human Rights Office to Jubi via WhatsApp on Tuesday (4/2/2020).

“The Local Government of Raja Ampat deprived the tenure land rights of indigenous Raja Ampat arbitrary. Therefore, Lokataru, the Law and Human Rights Office, as their legal counsel, condemns the land occupation by the local government over the tenure land owned by Hj. Salim family. The land is located in Waisai, Raja Ampat Regency. We found some facts showing the practice of deprivation over this land,” said Haris Azhar.

Second, the Raja Ampat government deprived the land by proposing the Land-use certificate to the National Land Agency (BPN) of Raja Ampat which issued in 2007 and 2008.

“The local government of Raja Ampat have done it secretly without any permission and consent from the customary landowner on the transfer of the customary tenure land. The government’s action is violating the Government’s Regulation No. 24 of 1997 on the Land Registration,” he explained.

Therefore, the government has broken its promise or conduct a fraud towards the customary landowner.
Four, the customary landowner has taken some persuasive actions and demonstrated their goodwill by visiting the government’s office and asking the Raja Ampat Regent for a dialogue on this issue. However, the local government was not willing to show their goodwill such as not giving any confirmation or explanation on the reason why they did not pay any compensation over the land.

Meanwhile, Musa, a member of Hj. Salim’s family said as the customary landowner, he hopes the local government of Raja Ampat shows its goodwill to solve this issue as possible as it could.

“In the mutual agreement, the government only borrowed our land. But now they (the local government) had claimed to have a certificate on the land which issued since 2007,” said Musa by phone in Sentani, Thursday (6/2/2020). (*)

Makassar, Jubi – Regional Secretary of Jayapura Municipal Government Frans Pekey said misgovernance could be a factor to cause the inadequate implementation of the Special

Jayapura, Jubi – Some 800 people protested in Keppi, the capital of Mappi District, in Papua after being unsuccessful in clearing the civil servant recruitment

Jayapura, Jubi – Papua area is dominated by forest which has high biodiversity. For indigenous peoples who live in the area around the forest, their