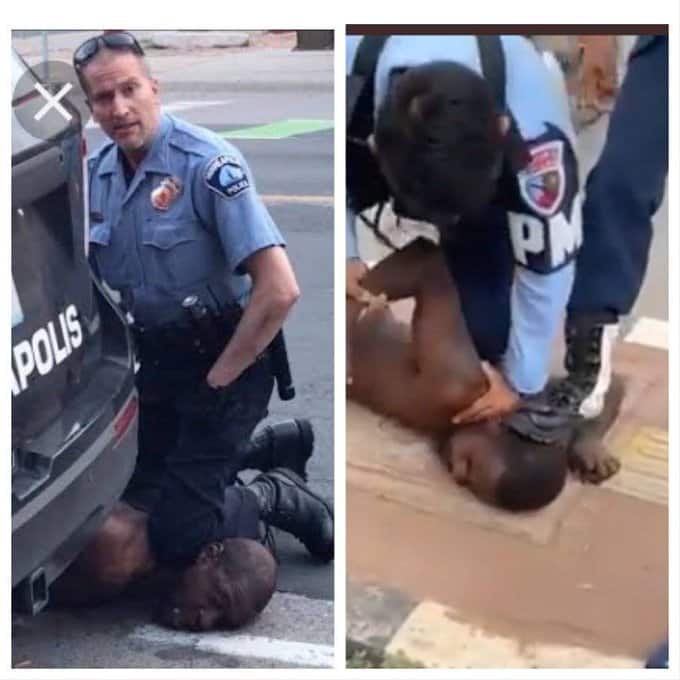 The picture on the left depicting two military police pinning and stepping on a Papuan man's head, similar to the racial abuse against George Floyd (right). Courtesy of IST.

Jayapura, Jubi – Two air force military police have reportedly racially tortured an 18-year-old Papuan in Merauke on Monday, July 26, 2021. The victim, named Steven, has a speech disability but was mistaken as being drunk and the soldiers blatantly slammed him and stepped on his head.

A video depicting the brutality of the officers widely circulated on social media and angered the public. Many called the military police action similar to the case of George Floyd, a black man killed in police custody in the United States last year, wherein the Minneapolis police officer, who is white, pinned Floyd, leaving him unable to breathe, even as Floyd and onlookers called out for help.

In the video, Second Sgt. Dimas Harjanto and Second Pvt. Rian Febrianto of the Johannes Abraham Dimara Air Force Base walked up to a food stall where two people, Steven and a man suspected as the shop owner, was seen arguing. One of the soldiers immediately grabbed Steven, accused him of being drunk, and pulled him out of the food stall. The soldier went on to slam him onto the sidewalk, pinning his knee on the victim’s back while twisting the victim’s arm. The other soldier put his boot on Steven’s head. Steven was unarmed and screaming in pain but the military police continued the abuse.

On May 25, 2020, George Floyd died after a white police officer, Derek Chauvin, kept his knee on Floyd’s neck for at least eight minutes. The other three officers, Thomas Lane, J. Alexander Kueng, and Tou Thao helped Chauvin pinning Floyd. The incident prompted large protests across the country pointing out systemic racism. The day after Floyd’s death, the Minneapolis Police Department fired all four of them. Hennepin County prosecutors later charged Chauvin with second-degree murder and the other three officers with aiding and abetting second-degree murder.

“The TNI AU will not hesitate to punish according to the level of offense,” he said in a written statement on Tuesday.

Merauke JA Dimara Airbase commander Col. Herdy Arief Budiyanto apologized to Steven and his family, the Papuan people, and the general public for his member’s excessive force and unlawful conduct.

“It is true that [the action] was carried out by two of my members. Their excessive force is very regrettable. Once again I apologize,” Budiyanto said in a press conference attended by Steven and his mother on Tuesday night. Budiyanto said that the alleged perpetrator, Harjanto and Febrianto, had been arrested and would undergo legal proceedings. Both are also subject to disciplinary punishment. “We are also responsible for Steven’s injuries and other losses,” he added.

On Wednesday, the Executive Office of the President (KSP) expressed its deepest regrets for the TNI AU officers’ disturbing action, calling it a form of excessive force and unlawful conduct beyond the applicable standards and procedure.

“KSP encourages all layers of society, especially law enforcement officers, to see multiple issues from human rights perspectives and to use more dialogue, especially towards people with disabilities,” he said.

He also appreciated the quick response of the TNI commander and the Air Force chief by holding the two personnel accountable before the law and further invited the community to oversee the process. “KSP will keep working to ensure victims receive protection and justice and the enforcement of laws is fair and equitable,” Moeldoko said.

Hesegem demanded law enforcement against the two officers. “The two officers have violated their duties as the TNI. They should have been dishonorably dismissed,” he told Jubi.

GOVERNMENT YET TO RECEIVE REPORT ON MIMIKA REGENT CASE YET