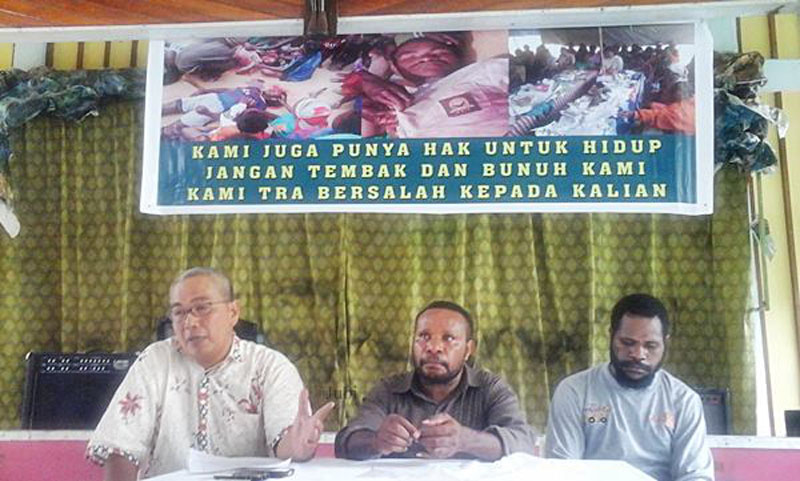 Jayapura, Jubi – Dozens of Papuan student activists staged a silent walk from Perumnas III Waena to Waena Expo and then headed to down town, Abepura, on Wednesday (9/12/2015)  to commemorate a year after the shootings at Enarotali in Paniai that killed four students and one civilian by security forces.

Members of the Youth Movement of Papuan People (Gempar) and Forum Independent Students (FIM) Papua and Student Executive Board of the University of Science and Technology Jayapura (BEM-USTJ) Papua took part in the rally.

Gempar Papuan activist, Samuel Womsiwor said this action was to reflect all cases of violation of Human Rights (HAM) that happened in Papua.
According to him, this aspiration has been conveyed to the government of the Republic of Indonesia
“I think the Indonesian government can be heartened because many countries are already worried about the issue of human rights in Papua. Jokowi should remember and must keep his promise, “said Womsiwor.

In the same place, coordinator of the Independent Student Forum (FIM) Papua, Teko Kogoya said the protestors wore black as a symbol of grief that hit Papua ahead of this Christmas.
“Today the victim’s parents in Paniai remember the death of their children. We also as a family, we demand that the state should be responsible for this case, “said Teko.

“So, the core of this action as an expression of our grief in this holy month of December,” he added.

He also added, Thursday (10/12/2015) is a global human rights day where all the people of Papua are invited to wear black clothes and go down to the street.
“If necessary all government offices are also closed. We all together reflect it in a peaceful protest to the office of Abepura DPRP. Papua People can participate in this action,” he concluded. (Abeth You/Tina)

Government Urged to Pay Attention to 12 Victims of Tolikara Incident