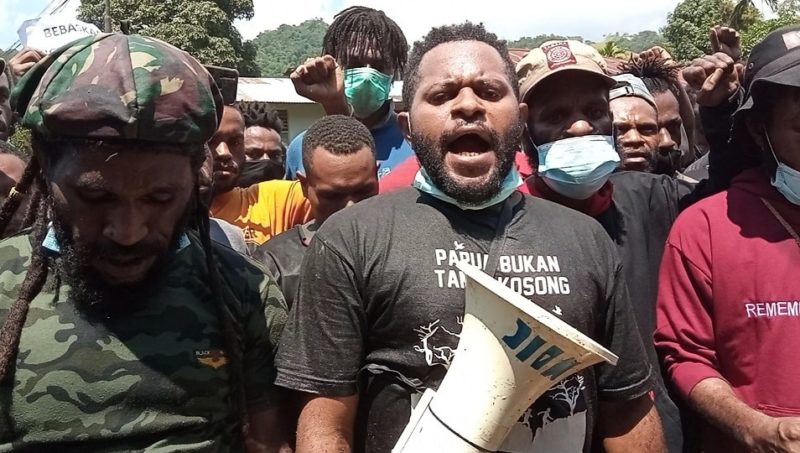 Jayapura, Jubi – A group of people of the Papuan People Petition took to the streets on Monday, August 16, 2021, to demand the release of human rights activist Victor Yeimo, the West Papua National Committee (KNPB) spokesperson. The Indonesian Military (TNI) and police, however, blocked the protesters with water cannon and even hit some of the protesters.

“KNPB leader Agus Kossay was hit on the head until he was injured and bleeding. Another activist, Alfa Hisage, was hit on the right side of his head. Several other activists have also been beaten by the TNI and police,” one of the protest participants, Nels Wenda, told Jubi in a phone call on Monday.

Wenda said that police brutality occurred when a number of activists and students joined in the Papuan People Petition were holding a peaceful protest in three locations namely Jayapura City, Perumnas 3 Waena, and Heram District.

“We are demanding the authority to free Victor Yeimo, whose currently being detained in the Papua Mobile Brigade headquarters (Mako Brimob) while he is in good health,” he said.

Yeimo was arrested in May for allegedly provoking riots in the antiracism protest in 2019, despite him denying such allegation. Ever since his arrest, his health has continued to deteriorate. Other than Yeimo, there is also a student activist of Cenderawasih University, Frans Wasini, who is being detained by the police since three months ago.

Read also: I was not there: Victor Yeimo denies involvement in protest turn riots

National Commission on Human Rights (Komnas HAM) Papua head Frits Ramandey said he had asked the police and the High Prosecutor’s Office to prioritize Yeimo’s physical and mental health during the legal proceedings.

“It’s also important to take notes on his psychological condition. When Yeimo is under stress, it puts him at grave risk of other diseases,” Ramandey said on Saturday. According to him, one of the stressors was Yeimo being held alone at the Mako Brimob and unable to communicate with other people at all times, even his family members had difficulty seeing Yeimo.

Ramandey also said that according to his team, who recently visited Yeimo at his cell, Yeimo told his struggle getting out of the detention room even if it was just to sunbathe every day. He is only allowed to sunbathe on certain days. Yet what Yeimo wanted was to be able to sunbathe every day to support his health condition.

Local Leaders Urged Not to Remain Silent About Violence