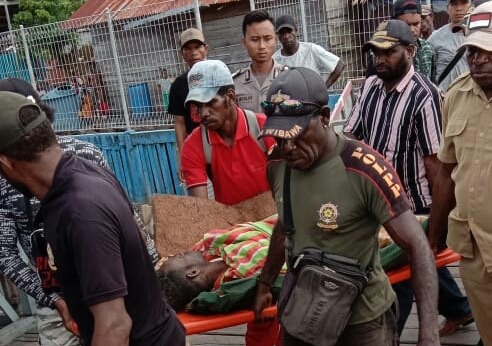 Illustration of victims of violence in Papua. -Jubi/Dok

Jayapura, Jubi – Any forms of violence and human rights violations that continually occurred as well as the failure of the State to fulfil the economic, social and cultural rights of indigenous have long been a root of self-determination among Papuans, stated Nicolaus Degey, a member of Religious Working Group of Papua’s People Assembly, in Jayapura on Monday (17/6/2019).

Further, he says many Papuans perceived that they continue to experience being murdered, directly or indirectly, through a series of violence and human rights violations, and poor public services, especially in health and education.

“Papuans only want to live safely and peacefully. But, if there is no guarantee of it, they must think about a solution that gives them a guarantee,” said Degey.

Moreover, he says that Papuans recently thought that any solutions offered by the central government in Jakarta, such as the expansions of provinces and regencies within Papua, have failed to materialise the fulfilment of the civil and political rights as well as the economic, social and cultural rights of Papuans. This failure has made Papuans believe that they require extreme solutions, including self-determination.

He continued to say that the torture, murder and human right violations have long occurred in Papua since the former President Soekarno announced Trikora (military operation) on 19 December 1961. Other military operations followed after that period (1965, 1977-78 in central highlands, 1984-85 in Paniai) resulting in another series of human rights violations.

After the period of military engagements, Papuans continue to experience another series of human rights violations, including through the military operation in Mapenduma in 1996, and other massacres in Biak (1998), Wasior (2001), Wamena (2003) and Paniai (2014). All these cases have never been solved and only raise new series of violence in Papua.

For example, on 2 December 2018, the West Papuan National Liberation Army under the Commander Egianus Kogoya attacked and killed the construction workers of Trans-Papua Road in Nduga Regency. As a response to this act, the Indonesia Government sent a joint military force to Nduga.

The military operation has made thousands of civilians in Nduga Regency fled to neighbouring regencies to avoid the armed conflict between the joint military force and liberation army. Currently, the refugees of Nduga live with limitations and difficulties to get health and education services.

Recently in April, the security forces involved in the shooting incidents with civilians in some regions. Six Papuans reportedly killed and five others injured. Degey said these series of violence, especially the impact of the joint military operation, have made Papuans living under threat.

In contrast, it also made Papuans becoming more resistance because they felt the treat over their life become so real. “Papuans must be more radical now (because of the joint military force operation) in Nduga,” he said.

Therefore, Degey urges the State to realise that military operation that killed thousands of life does not solve the problem in Papua. The problem in Papua can only be solved if the government recognise the rights of life and freedom of Papuans. Therefore, Papuans and the Indonesian Government need to sit together in a forum of dialogue.

Meanwhile, a member of the Special Committee for Law and Human Rights of the Papua’s People Assembly, Sarah Ita Wahla, adds that the prolonged conflict of violence in Papua has taken the rights of life and freedom of Papuans. Indigenous Papuans, in particular women, have never been free to celebrate their lives as a free human being.

She then takes an example of women in Nduga who had to flee to other regencies such as Lanny Jaya, Jayawijaya and Mimika to save the lives of their children. “When we visited the refugee camp, these women told us ‘please fight for our freedom’. That’s their message. But who would listen to them? Even us, here (as members of Papua’s People Assembly), no one wants to listen to us,” she said. (*)