Prevalence of Cataract in Papua High 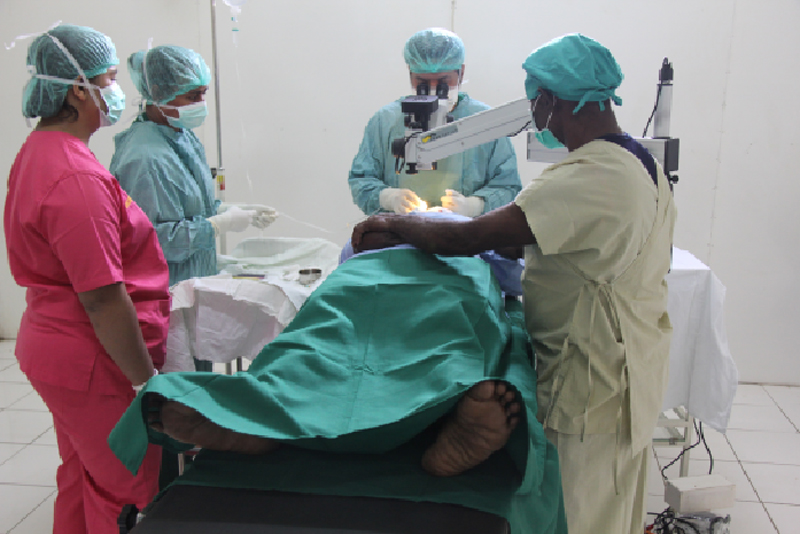 Since the last week, the ICRC has provided the eye treatment and catatact surgery for local residents in Lanny Jaya Regency in collaboration with the Central PMI, PMI Papua, Dian Harapan Hospital and local government - Jubi

Since the last week, the ICRC has provided the eye treatment and catatact surgery for local residents in Lanny Jaya Regency in collaboration with the Central PMI, PMI Papua, Dian Harapan Hospital and local government – Jubi

Wamena, Jubi – Papua has the highest prevalence of cataract among other provinces in Indonesia, the International Committee of the Red Cross (ICRC) and Indonesian Red Cross (Palang Merah Indonesia) released a data based on the eye-care services in all regions of Indonesia.

“Due to this prevalence, the ICRC and Indonesian Red Cross believe some remote areas in Papua are requiring health services, in particular eye treatment to reduce the number of blindness among the local people,” Program Manager for program partnership of the International Committee of the Red Cross, Freddy Nggadas told reporters in Wamena on last week.

So far, ICRC always supports the local government in Papua though collaboration with the Indonesian Red Cross in Jakarta and Papua as well as the local hospital Dian Harapan Jayapura Hospital in providing the eye-treatment services or cataract surgery in many regions.

“We’d like to support PMI and Dian Harapan to work in Papua, because some regions at the highland and remote areas have difficult access of transportation, lack of ophthalmologist, therefore we collaborated with Dian Harapan and PMI to enforce the local government to the elimination of blindness and catarac,” said Nggadas.

Since the last week, the ICRC has provided the eye treatment and catatact surgery for local residents in Lanny Jaya Regency in collaboration with the Central PMI, PMI Papua, Dian Harapan Hospital and local government.

‘Within this year, we are trying to work with local governments of Yalimo, Mamberamo Tengah and Yahukimo as well. Next year we will traveling, possibly to Lanny Jaya once again expecting to conduct the next treatment of previous surgery, therefore we can work with the people, while the local government could be independent,” he said.

Meanwhile, the ophthalmologist of Dian Harapan Jayapura Hospital, Januar Ali, revealed in Indonesia, especially in Papua, the blindness is mostly trigered by cataract, which is 0.78 percent of the number of population in a region. “For example in Lanny Jaya Regency; if the number of population reaches 200 thousand people, about 0.78 cases was resulted by cataract. But most cases are treated medically, so people could see as before,” he told reporters.

He further explained cataract is mostly occurred due to aging, but could be triggered by other diseases such as diabetes or trauma, or simply by birth. “Of cases discovered in Papua, especially in the highland area, though there is still no official survey, but since 2003 I had traveling to several regions in Papua, I founded the residents in the highland area mostly got cataract but the reason is still unidentified. So far there is no survey or research on this issue, but referring to the habit of highlanders, due to cold weather, prefer sunbathing, it is likely the ultraviolet causing people are more prone to cataract,” he said. (Islami/rom)

Communities should take Advantage of ICT

Residents Complain about Poor Quality of Rice for Civil Servants

Yahukimo, the entrance of gold miners to Pegunungan Bintang