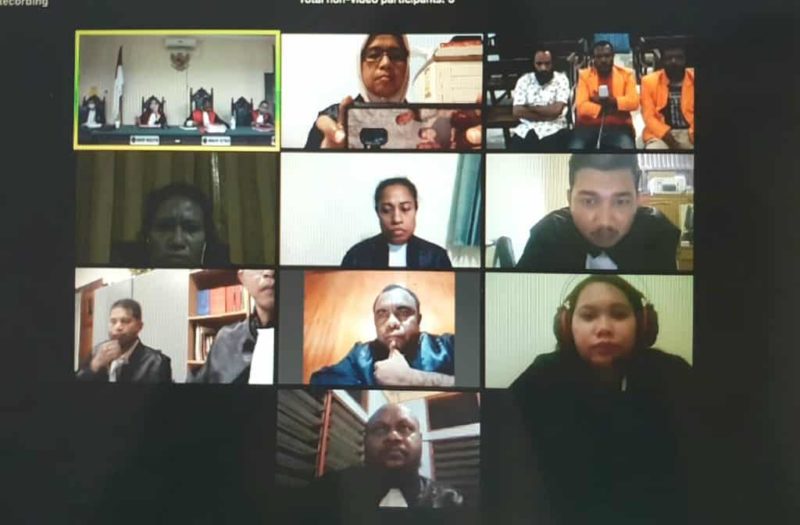 Trial to read the indictment against five of seven political prisoners via teleconference on Friday (5/6/2020). – Jubi/Courtesy Legal Councillor Team

Jayapura, Jubi – The Coalition for Law and Human Rights Enforcement of Papua complains about some issues that their clients encountered during the trial of seven Papuan political prisoners in Balikpapan. Those issues, they say, including the poor Internet connection which implies their clients. They were not able to hear and listen to each other during the trial arranged via zoom.

“Many issues we found during the trial,” a member of the legal councillor team Emanuel Gobay told Jubi.co.id on Saturday morning (6/6/2020).

Also, he requests the Court to at least provide a better Internet connection to make sure that both the legal councillor team and their clients can hear the attorney’s voice.

“Such issues include the poor Internet connection, interrupted or even unclear voice,” he said.

He also complains about how unfair the judge was in terms of time allocation. The judge gave more time for the public prosecutor to speak than the legal councillor.

Despite the Internet and time allocation, the legal councillor team found the professional expert by the public prosecutor to testify in the trial was incompetence. The expert talked about something irrelevant with his expertise. So what he presented before the Court was biased.

“The expert witness gave opinions beyond his expertise, but was so confident about it. We also worried about other issues that may violate the defendants’ rights,” says Gobai.

Separately, a Papuan parliament member Laurenzus Kadepa, who acted as a de charge witness for a couple of times, hopes the public prosecutor being wise in presenting an indictment against the seven defendants because they are not perpetrators but the victims of racism.

“As a member of Papuan Parliament who observed and watched the demonstration that day, I presented everything based on the facts to the panel of judges to consider in their decision,” said Kadepa. (*)

No, thank you: Jakarta opens liquor investment in Papua, which has been grappling with alcoholism