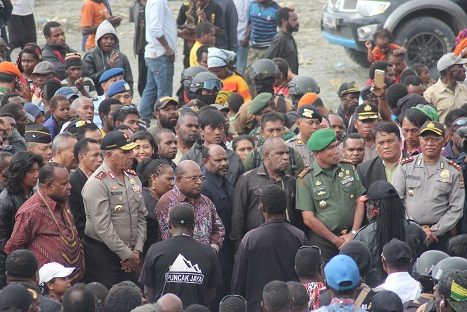 “We have direct contact with the local police to analyse firearms trafficking cartels in this area. Our concern that some irresponsible groups misuse it,” said Police Commissioner Gidion Arif Setyawan, the Special Crime Investigation Chief at East Java Regional Police, in his office on Monday (13/1/2020).

The investigation, he continued, is still ongoing. He said the police also concern about this finding because insurgent groups used to have high calibre weapons.

“Especially high calibre firearms. If 4.5 calibre riffles might not be high, but we need vigilant with above 6.5 or 9 calibre weapons. Some regional police offices have agreed to follow up this issue,” he said.

Previously, Papua Police Chief Inspector General Paul Waterpauw suspected the distribution of firearms and ammunition in his territory were from international and domestic dealings.

“Indeed, we have information that those firearms not only come from domestic sellers but also from abroad. There are indications that it comes through the border area, and from the Philippines via North Maluku, Sorong, West Papua Province into Papua. This route what we are tracking now,” he said in Timika on Monday (13/1) as quoted from Antara.

Further, he stated that he also received information about firearms assembled in Lumajang, East Java, had distributed to Papua.

The similar issue had once been revealed by some police officers from the East Java Regional Police some time ago. (*)