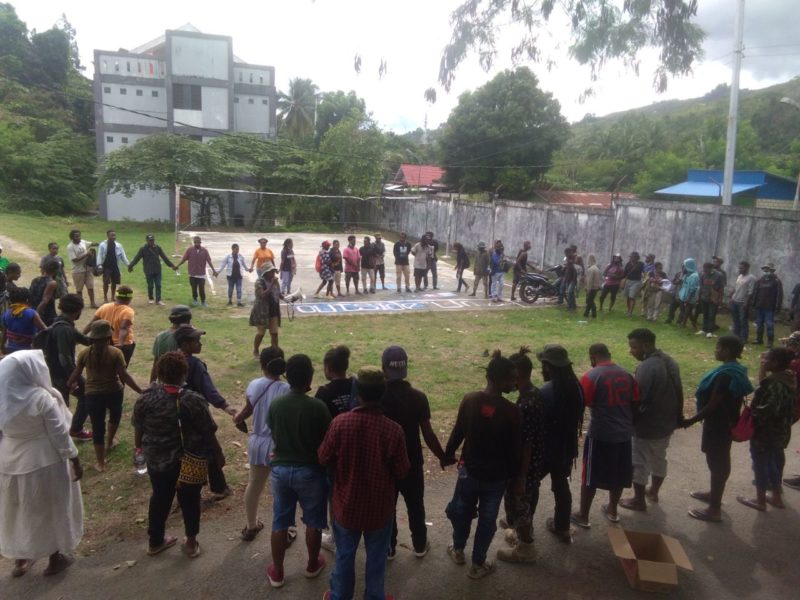 The Jayapura Police arrested the nine and dispersed the rallies because they said it violated the Covid-19 health protocols. The nine were held not for long in the Jayapura Police precinct and the police released and returned them to the rally location in Waena, Jayapura.

At 8 am, the police had guarded the location at Expo Waena. When the protesters from the alliance arrived at 9 am, they opened the rally with speeches for 30 minutes. But after 30 minutes, the police approached the participants and asked them to disperse themselves, citing reasons that the protesters were violating Covid-19 protocols and disrupted the traffic.

The alliance general coordinator, Rossyana said the police made Covid-19 protocols only as a pretext. “They used coronavirus as the reason but they used repression. They pulled us, pushed us. They said ‘hey you don’t understand the law, you spread a virus, who is going to make you behave’. We explained the regulation we used but the police said they were old rules,” Rossyana said.

Read also: When reparation is out of reach, violence against Papuan women continues to occur

At Jayapura Police precinct, the nine protesters refused to be brought for questioning until their lawyers, from Papua Legal Aid Institute (LBH Papua), came. At 1 pm, the police released them.

“They asked us some questions but we did not respond. We said wait for our lawyers. The police took our megaphone but we managed to get it returned,” she went on.

Rossyana said the rallies were to voice economic and education discrimination against women in West Papua. She said many native Papuan women traders, called mama-mama Papua, did not get any proper facility to sell their products.

Rossyana said the formal education during the pandemic, done online, had posed some difficulties for some students because many teachers only gave them assignments without proper explanation.

“We want justice. Our goal here is to raise public awareness that it is not something we should accept, but a suffering we slowly feel. We took to the streets to raise the awareness,” she said.

Jubi tried to confirm the reason for the arrest to Jayapura Police, but no one at the precinct gave Jubi any explanation. They said the chief was going out of town.

Critics have said that the rules for health protocols during the pandemic is not consistently enforced. The authorities let some others hold a big crowd but dispersed others. Many people criticized the North Sumatra Police, for example, for letting a contesting faction in Democractic Party to hold a large meeting in Medan, North Sumatra. It was reported that more than 1,000 people gathered for the meeting, which declared presidential chief of staff Moeldoko as the new party chief.

VOTE COUNTING PLENARY CAN NOT BE HELD OUTSIDE YAHUKIMO REGENCY, BAWASLU SAYS

Free Papua Movement looks to PNG to push for negotiations

President Jokowi Not to Keep the Promise