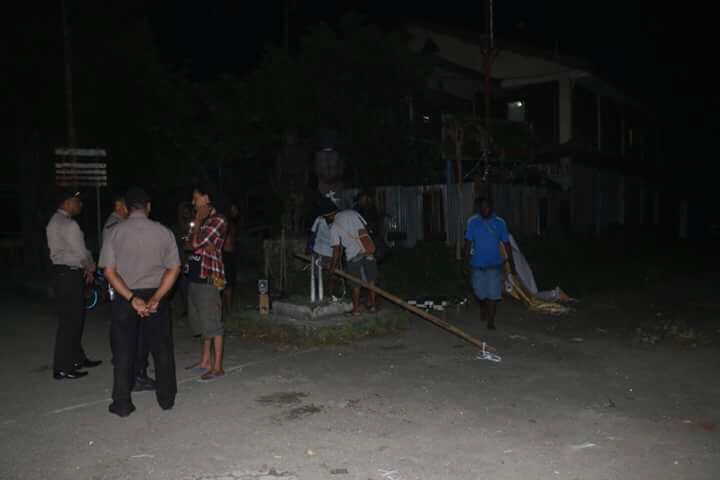 “The dissolution carried out by police officers of Buper Waena section and Head of Operational City of Jayapura,” said Secretary General of GempaR-Papua, Yason Ngelia, in a press release on Monday (October 2).

Yason said the dissolution was unreasonable because the similar activities of screening were held several times in the same place, and got permission from the responsible settlement area. “And were getting good reception from the surrounding community,” said Yason added.

According to him, the film is much more educational than the fiction film that was being screened by the police in Waena expo, which is located 100 meters from where they held a screening of the film.

Police’s initiated movie (which was the famous New Order propaganda movie ‘Pengkhianatan G 30S/PKI’) appears to be trying to provoke society, because the film contains fictional stories, which clearly spread the past hate to today’s generations.

In addition he considers the police also deliberately commit duping to the people who should have the right to the fact of 1965’s history. Yason argues the dissemination of fiction as a hoax into the community and as a message from the TNI-POLRI that the authoritarian regime and the new order fascist regime are being strived to rise again.

Yason asks Papuans acting smartly by avoiding the police effort and provoking soldiers. “We believe that in the future there will be more agenda of the movie screening,” he said.

Movie Screening Coordinator, Sipay Siep stated that screening and discussing the film G.30.S as an effort of student and youth to fight the duping. He also regretted the dissolution of the event.

“We apologize to the students at some campuses and dormitories in the city of Jayapura who have received an invitation while we failed to screen it,” said Sipay

According to him, there are residents of two student dormitories around Jayapura City who plan to play and discuss, in order to commemorate the mass monitoring of September 30, 2017.

“We failed to show state crime in hegemony through a forgotten film,” he said. However, there were two communities of student can hold the similar movie screening at their dormitories.(*)

State should protect Papuan women and children, not kill them: MRP