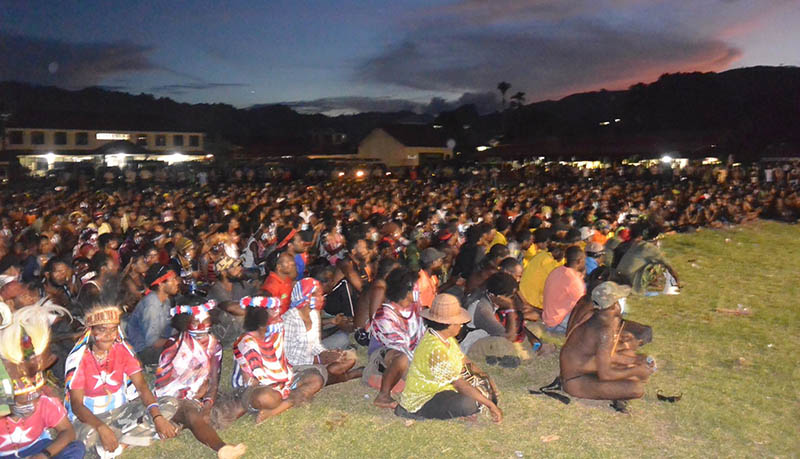 The recent arrests of nearly 1,500 protesters in Jayapura are part of a broader systematic oppression of Papuans by the Indonesian government on last May - Jubi

The recent arrests of nearly 1,500 protesters in Jayapura are part of a broader systematic oppression of Papuans by the Indonesian government on last May – Jubi

At least 89 activists were taken by Police vehicles from many locations such as Kelapa Lima, Onggatmit, behind Merauke Public Hospital and Lepro to Merauke Police Headquarters.
Merauke Police Chief Adjunct Senior Police Commissioner Taufiq Irpan Awaluddin told Jubi on Monday (19/9/2016) that 20 of 89 activists were arrested the night before but the rest were arrested in the morning under the direction of the Operations Chief Commissioner Marthen Koagouw.
He said the activists were still being questioned.
“I don’t have any report from the Crime Investigation Unit about the protest plan. If there was something of about the crime, it would be processed in according to the Law” he said.
But on the other hand, said the chief, if no crime was found in the investigation, they would be released but with supervision.

He admitted most of them encouraged to join the protest because of being provoked, after reading the pamphlet inviting people to against the Republic of Indonesia.

“Though they would be released, but if they were caught attending the illegal gathering to disrupts the Republic of Indonesia, they would be arrested and processed according to the Law,” said the chief.

The Operations Chief Commissionaire Marthen Koagouw admitted if KNPB supporters had no chance to do the rally. They were gathering in several locations, so the Police took the action to bring them to the Police Headquarters.
“Our officers are still identifying the KNPB leaders and supporters. It would be our reference. Last night we secured them because of the illegal gathering. While the rest was arrested last morning and directly taken to the Merauke Police Headquarters by car,” he said.  (*/rom)
KNPB peacefull protest protest

Amnesty International : There may be Further Arrests of Peaceful Political Activists in West Papua

Focus on infrastructure development has made human rights enforcement lacking?