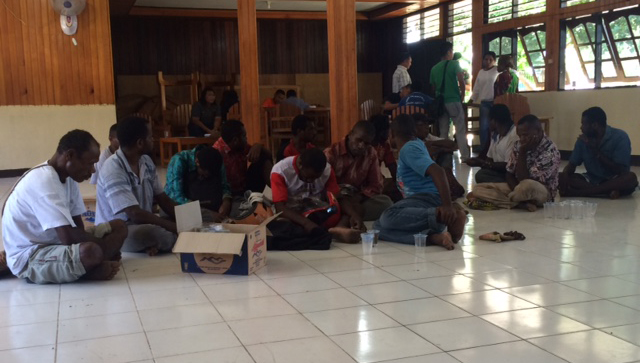 Jayapura, Jubi – Nabire Police arrested about 20 people who were preparing for a prayer gathering to commemorate the West Papua Anniversary.

A Nabire activist Gunawan Inggeruhi said they were arrested at 10:30 AM local time while gathering at Bunga Bangsa Park, Oyehee, Nabire.

“At that time, the police were doing raids. Their cars were driven into the field near the park. We were outside the park to prepare the place for worship event. Suddenly they were out of car and arrested us. They also beat us with rattan,” Inggeruhi said.

Until now, he said, he didn’t know the reason behind their arrest. He claimed they only wanted to do worship, raising the morning star flag wasn’t on their agenda.

The Papua Police Chief Inspector General Paulus Waterpauw said they were detained for raising the morning start flag. But not longer, he corrected his statement through the same media, said they were arrested for combatting the officers when disbanded while doing the activity at Lapangan Gizi Nabire.

Inggeruhi denied his friends attacked the police while being disbanded on Saturday morning. “We didn’t fight the police. They just come to arrest us. We only brought some bamboos to build a stage. We didn’t fight at all,” he said.

The Chronology of Mass Arrest in West Papua on May, 2nd