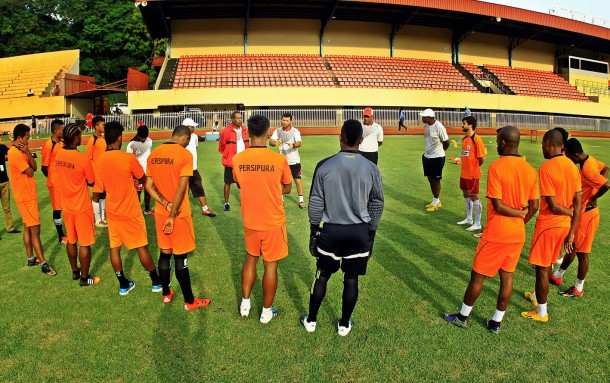 Jayapura, Jubi – Persipura Jayapura will suspend activities because o the lingering uncertainty about a league competition in Indonesia.

Persipura will not take part in the Kaltim Governor Cup and the Indonesian Police Chief Cup, said Persipura General Chairman Benhur Tommy Mano to reporters on Tuesday (9/2/2016) in Jayapura after meeting with Persipura coach and players.

“In the meeting, we (management-red) gave two options to the players whether to keep practicing but being unpaid or take a leave while waiting for a clear decision on tournaments,” said Mano.

He added the meeting was delayed in order to give times for both players and coach to decide over two options. “So, the players agreed to postpone while waiting for clear information of tournaments. Once it’s clear, we will call them,” he said.

Mano, who’s also Jayapura Mayor, said Bank Papua has replied the second letter of Persipura management related to sponsorship. “Bank Papua has approved our letter and agreed to provide Rp 2.5 billion funds. But we cannot get it all; it’s still included tax deduction and other cost. And it still cannot cover all the cost for a tournament. At least we need about 4 billion,” he said.

When asked about Kaltim Governor Cup tournament, Mano said since receiving the invitation letter from the tournament committee, Persipura Management has sent two officials to attend the meeting concerning to the preparation of tournament. In the meeting, Persipura officials asked question concerning to the Police Permit, but the committee couldn’t give proper clarification. “Because it is not yet certain, we would not harshly to decide our participation in that tournament,” he said.

At the same place, Persipura Manager Rudy Maswi said Bank Papua already stated its readiness to support Persipura to participate in the tournament, but Persipura cannot use the funds concerning to this uncertainty. “It is certain that in the signing of MoU should clearly mention the name of tournament. Well, until now there is any tournaments that clearly to be held, either it was Kaltim Governor Cup or Kapolri Cup or other tournaments. If it’s all clear, we will sign the MoU with Bank Papua and give report on tournament,” he said. (Roy Ratumakin/rom)

PERSIPURA AND TARGET FOR AFC 2014 SEMIFINAL

Persipura Intentionally Being Stop in AFC?

Franklyn Burumi Urged Not to Participate in National Games

AFC CHAMPIONS MATCH IN JAYAPURA DESPITE FLOODS AND LANDSLIDES