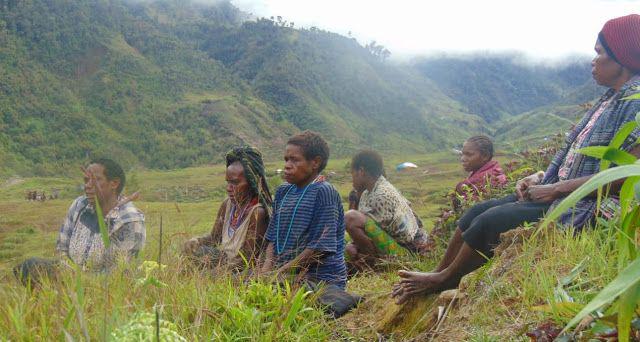 Nduga residents forced to exile from their villages. - Jubi / IST

Nduga residents forced to exile from their villages. – Jubi / IST

“Everyone is responsible for representing their institutions for this solidarity,” said Alfonsa Wayap, the Secretary of the Youth Church Ministry for Nduga Aid Solidarity.

The deanery of Jayapura preferred because it locates in the capital city of Papua Province, Jayapura, which known as the centre of education and economic development of Papua. Thus, these young people pinned their hopes to its residents to get involved for solidarity.

“I wrote to the parish priest. We hope they will announce it to people in the Sunday mass on 6 January,” she said.

Meanwhile, Deacon David Wilil Pr, the assistant of Parish Priest of Kristus Terang Dunia Waena, confirmed received the letter from the Catholic Youth. “We already received the letter. I have submitted it to the board of the Parish Council. There the board will talk,” he said.

About the aid, the Coordinator of Youth Ministry for Nduga Aid Solidarity Yendinus Mabel who’s also the General Chairman of GIDI Youth said this solidarity is solely concerned about the humanity regardless of political interest.

Moreover, donations collected from seven parishes brought to the secretariat of aid solidarity in GIDI Headquarters located in Jl. PLN, Sentani of Jayapura Regency, 26 kilometres from Jayapura City to be transferred to Nduga.

Travelling from the capital city of Papua to Nduga Regency is not easy. People can only access it through Jayawijaya Regency which takes about 45 minutes by air plane flying from Jayapura. Then we should spend almost a day travel by car to reach Nduga and take more two days on the road to reach the location of refugees.

“We hope this aid will go to the right persons,” he told Jubi.

In the meantime, Ester Haluk who represents her colleagues of KINGMI Papua said this aid is critical to help Nduga resident reducing their life burden and trauma against the military operation.

“There is a trauma among the refugees. As a human being, we want to be comfortable, feeling safe, free to work to fulfil their basic needs.” (*)

President Jokowi to Keep His Promise to Papuan Women Traders

Mobile Brigade Headquarter Was Suspended Due to Obscurity of Land Handover