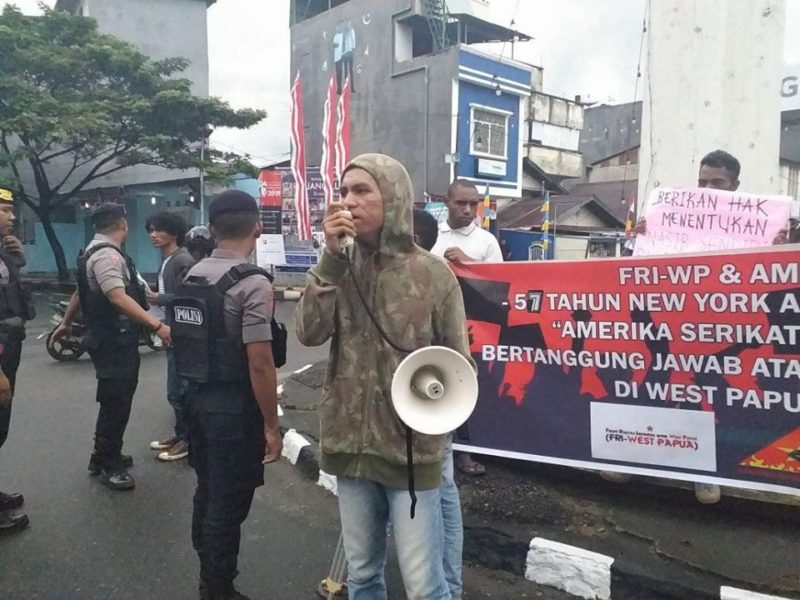 Papuan students during a peace demonstration in Malang. – Jubi/Dok AMP 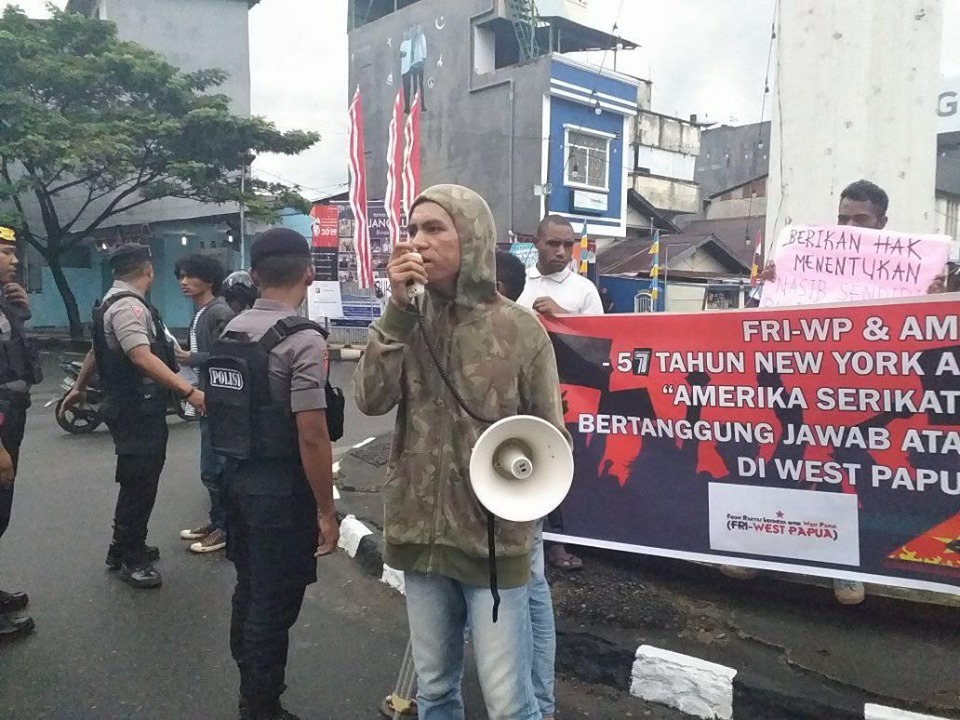 Papuan students during a peace demonstration in Malang. – Jubi/Dok AMP

Jayapura, Jubi – Students joined the Papuan Student Alliance (AMP) and People’s Front of Indonesia conducted a peace rally in Malang on Thursday morning (15/8/2019). The protest ended in a riot after a local mob came to the scene.

John Gobay, the Chairman of Central AMP, confirmed the incident involved a local mob and Papuan students in Malang. He said it occurred at around 9:00 p.m. at the local time when the students conducted a rally in Jalan Basuki Rahmat approached by the local mob.

“The mob shouted at the students. They have beaten them with helmet, mocked and called them with some animal’s name. They also threw stones and kicked the students. Police were there when the incident happened, but they did not do anything. They only asked the mob to disperse when they saw some students have injured because of the torture,” said Gobay.

According to him, five students reportedly injured. Further, he admitted that some students also threw the stones back the mob. “Some protesters threw back the stones. The police were already on the scene with three motorbikes and a police truck,” he said. However, some police personnel on the scene later grew.

“They then directed the injured students to get on the police ambulance though there was an ambulance from a public hospital,” said Gobay.

Besides the police, he said a military vehicle came to the scene. The truck drove racing and almost hit the protesters. “One of the protesters were arrested by the police, while our friend Niko Jigibalom was still reportedly missing.”

Meanwhile, an activist who involved in the rally, Pangkrasia Yeem, explained the rally is to protest against the New York Agreement which considered a beginning of many human rights violations in Papua. The New York Agreement is a treaty signed by the Netherlands and Indonesian Governments on 15 August 1962. “Papua becomes integrated with Indonesia because of a unilateral agreement between Indonesia and the Netherlands,” said Yeem.

He also accused this agreement had neglected the right of indigenous Papuans when it was signed. “The New York Agreement is a treaty of fraud, an instrument of annexation, murder and genocide against the West Papuan Nation by scarifying West Papuans. Therefore, we ask the governments of the Netherlands, Indonesia, and the United States as well as the United Nations to take responsibility immediately for the people of West Papua,” explained Yeem.

In this sense, Gobay said the statement that Indonesia has taken control over Papua was not a mistake. Indonesia had violated the New York Agreement, which stated that the Papua’s self-determination in 1969 should involve all Papuans. Ironically, Indonesia also signed a contract with Freeport McMoRan on 7 April 1967.

“The contract with Freeport signed before the public vote of 1969 conducted. In 1969, there were 809.337 Papuans who recorded as legal voters, but the vote ended with1, 026 voters who had previously been quarantined by the Indonesian Government. Therefore, on the 56th anniversary of the New York Agreement, we demand the Jokowi-Kalla administration, the Netherlands, the United States as well as the United Nations to immediately grant the right to self-determination for Papuan people,” said Gobay.

Furthermore, the Papuan protesters also urge the Government of Indonesia to immediately close down the mining activities of giant transnational companies in Papua, including Freeport, BP and LNG Tangguh. They also ask the United States to be responsible for advocating the New York Agreement that accused as the gate of oppressive acts by the Indonesian security force against Papuans.

Moreover, in their protest, the students asked the Government of Indonesia to determine Papua as a free military zone and to guarantee the freedom of Papuans to gather and express their opinion in public. They also asked the government to allow foreign journalists to cover the issue of Papua. Lastly, the students expressed their supports towards the Pacific Islands Forum (PIF) that conducted on 13-16 August 2019 in Tuvalu. In this forum, the Pacific leaders are planning to address the West Papua issue. (*)

They Knew I Once Refused A Pardon, Says Filep Karma

Smuggler Suspected as an International Drugs Dealer from Africa