Jayapura, Jubi – The Papuan Students Alliance in Surabaya, East Java have staged a protest on Tuesday, July 6, 2021, to commemorate the 23rd anniversary of the Biak massacre. The students demand the state to resolve the alleged human rights violation.

Rally coordinator Ever Walela said that even after 23 years, the Indonesian government had never tried the alleged perpetrators of the Biak massacre. Such impunity has only been perpetuating rights violations and exploitation of natural resources in Papua.

“Today we continue to see massive land grabbing, police brutality, the arrests of Papuan activists, and internet blackout in Papua. The state, through its military, continues to commit human rights violations and unlawful killings,” Walela said.

“Therefore, today, in the memory of the Biak massacre, the Papuan Students Alliance demands the Indonesian government and the international community, the United Nations, to investigate the human rights violations committed by the state,” Nelvin said.

“The state must be responsible for the Biak massacre and other rights violations in Papua,” he added. 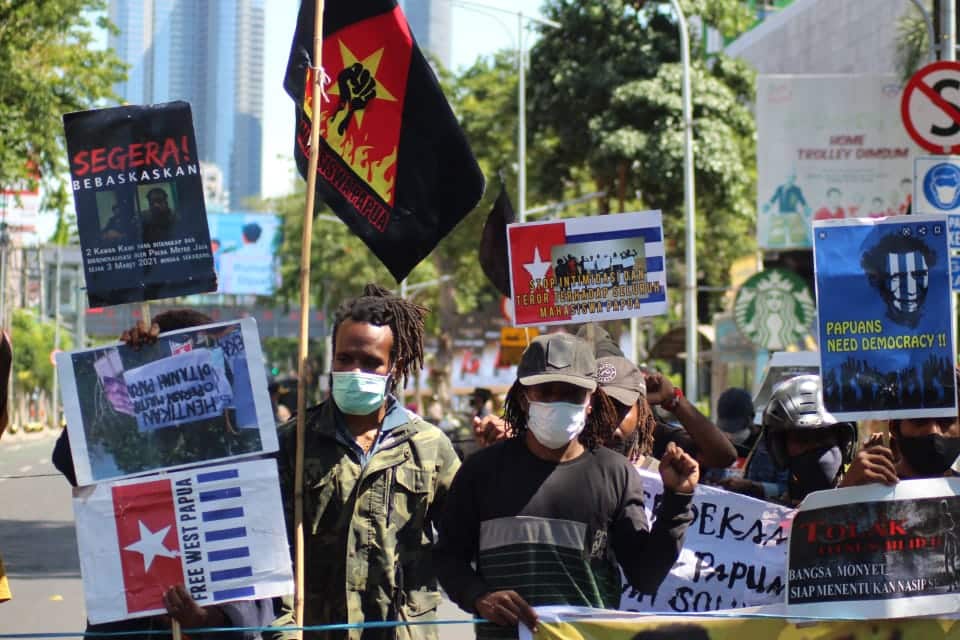 Papuan students held a peaceful rally in East Java’s Surabaya to commemorate the Biak massacre that occurred on July 6, 1998. Courtesy of the Papuan Students Alliance.

The protest on Tuesday was closely guarded by the police that participants were unable to distribute leaflets containing their demands for action.

“There were around 40 policemen in our meeting point including intel officers in casual outfits. We managed to do a long march but when we arrived at the Grahadi building, the police had closed the road,” Nelvin said.

With the road being closed, not a single vehicle passed and protesters could not distribute their leaflets to the public. “We tried to negotiate [with the police] to allow vehicles to pass through the demonstration site to no avail,” said Nelvin.

The students eventually read their demands and went back to the Kamasan Student Dormitory. On their way home, the students distributed the leaflets to the pedestrian.