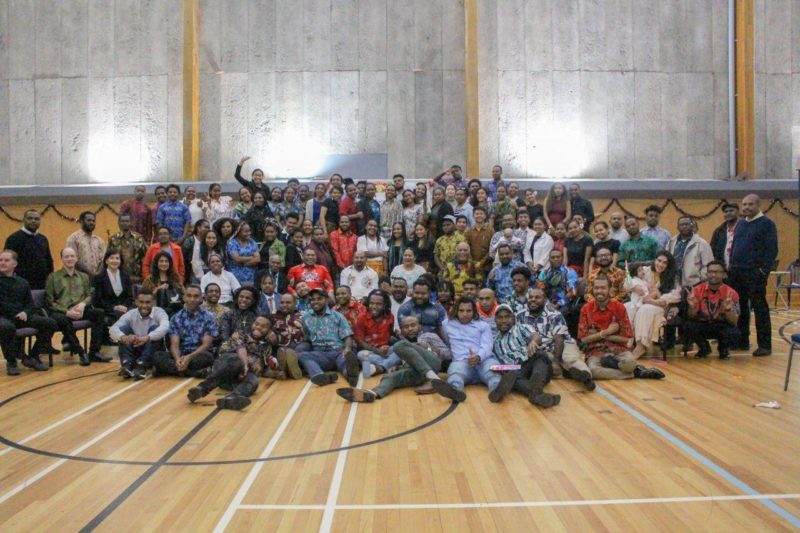 Students Papua in New Zealand with the Governor Lukas Enembe after the celebration of Christmas 2019. - Jubi/Doc. Yan Piterson Wenda.

Jayapura, Jubi – Papuan students abroad have expressed their concerns regarding the fate of their education following the issuance of Law No. 21/2021 about the second amendment to Papua’s Special Autonomy (Otsus) Law.

According to the students, the transfer of funds did not take into account the ongoing scholarship program for Papuan students abroad.

For this reason, students belong to the Papuan Student Association in Australia, New Zealand, the United States, Canada, Japan, Russia, and Germany demand the central government to consider giving back ten percent of the education allocation to the Papua Provincial Government for the sake of the scholarship program continuation.

According to head of the Papua Students Association of Oceania (Australia and New Zealand) Yan Piterson Wenda, currently, there were at least 400 Papuan students receiving scholarships abroad, comprising 25 students in Australia, 77 in New Zealand, five in Japan, 250 in the US and Canada, 38 in Russia, and five in Germany. Of this figure, Wenda said, there were 84 students in the US and 41 in New Zealand who had received an email from the Papua Provincial Government that they would soon be repatriated to Papua.

“This is the impact that we Papuan students abroad feel. It is likely that there will be more names who will be repatriated as well,” said Wenda.

“We need money to eat. We have a monthly allowance that should have been disbursed in the second week of January 2022, but it hasn’t been disbursed yet. We also haven’t heard about the tuition payment process,” said the student at the Waikato University, New Zealand.

Furthermore, the students also mentioned their concerns about the district and city administrations managing their education funds, because, from past experience, even the student management in the provincial government itself had not performed well.

Currently, of the total Rp 5.5 trillion (US$ 385 million) Papua Special Autonomy Fund disbursed by the central government for Papua Province, only Rp1.3 trillion is managed by the provincial government. The remaining Rp 4.4 trillion will be transferred directly to 29 regencies and cities in Papua.

“We don’t know whether the regency and city administrations are able to manage our situation in the future,” said Ramandey. (*)