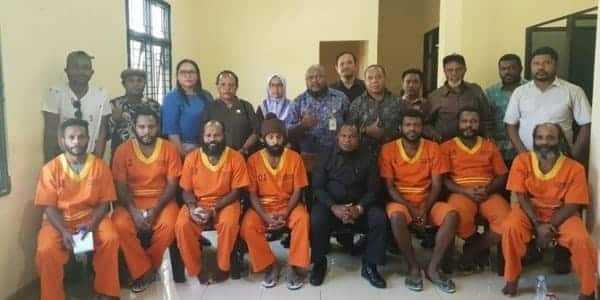 The panel judges found Steven Itlay and Alexande Gobai guilty and demanded them to get respectively 11 months and ten months sentences.

Itlay, the Chairperson of KNPB Mimika, was previously charged with 15 years, while the President of USTJ Student Executive Board Gobai demanded ten years in prison.

Concerning this, Steven Itlay expressed his gratitude for the verdict and started to think about whether accepting or rejecting it.

A member of the Law and Human Rights Enforcement Coalition for Papua Gustaf Kawer, as a legal advisor to the political prisoners, said the panel of judges are neutral in taking a verdict lower than the prior indictment by the Public Prosecutor. Kawer stated support from many groups of people to the seven political prisoners made it possible to solve the issues facing Papua, including many cases of human rights violations in Papua.

“We express our gratitude because the judges were neutral in taking the decision. If they were not, I am sure we cannot find any difference in the execution,” Kawer said in Jayapura on Wednesday (17/6/2020).

Hundreds of Papuan students in Jayapura City staged a peaceful demonstration at the entrance of Cenderawasih University (Uncen) to urge the unconditional release of the Papuan Political prisoners.

“The president must immediately release them because they are not political prisoners but the prisoners of racism, and we know the world hates racism.”

But today, we still see racism in Indonesia, so we, the Papuan Students in Solidarity, ask the government to release them immediately,” said the protest coordinator Ones Busop in his oration.

Gustaf Kawer said support towards the seven political prisoners reflect people’s movement to combat racism against Papuans. “These supports come from different regions in Papua and raised at the national and international level, ” said Kawer.

Moreover, he said support from the community, local elites, national and foreign supporters are an excellent capture in bringing Papua to a better direction.

‘I think that this enthusiasm should be maintained, not only ahead of the trial, but to unite the Papuan grassroots to elites to push the release of (the political prisoners). “If we can maintain this spirit, it’ll change everything in Papua. For example, human rights violations, discrimination, as well as violations that occurred in the past. Let’s go together (to solve the problems),” he said. (*)