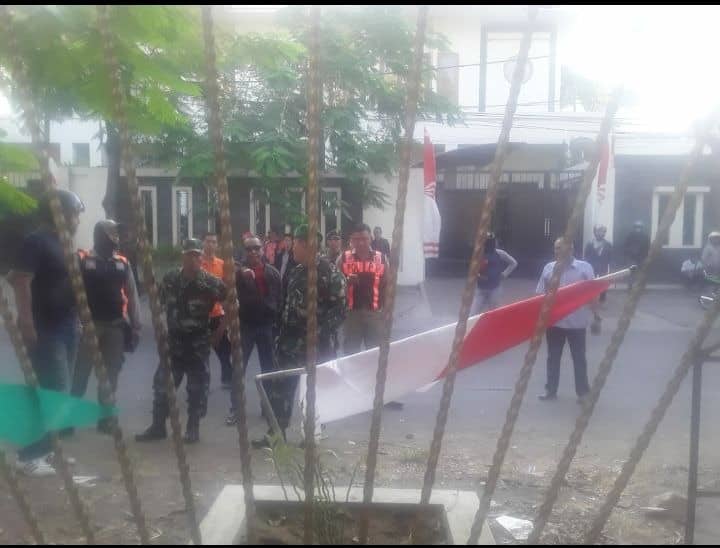 Racist taunts and persecution against Papuan students at Kamasan III Dormitory on Friday (16/8/2019) in Surabaya triggered the anti-racism demonstrations in many towns and cities, including the anti-racism protest in front of the State Palace in Jakarta on 28 August 2019. – the Courtesy AMP

Jayapura, Jubi – Six political prisoners attended a hearing to read the charges on Friday (3/4/2020) in the Central Jakarta District Courts. The public prosecutor charged them guilty of committing treason for carrying Morning Star flag and calling for a referendum for West Papua in a protest.

The six political prisoners conducted a rally in front of the State Palace on 28 August 2019 to protest racism against Papuans. The protest of “Anti-racism, anti-capitalism, anti-colonialism and anti-militarism’s Students” reacted the incident of racist taunts and persecution against Papuan students in “Kamasan III” student dormitory in Surabaya on 28 August 2019.

In the anti-racism demonstration that occurred in front of the State Palace, the protesters brought the Morning Star flag and called for a referendum for Papua. Although the demonstration took place peacefully, the six protesters, Paulus Suryanta Ginting, Charles Kossay, Dano Tabuni, Isay Wenda, Ambrosius Mulait and Arina Elopere, were arrested on 30 and 31 Agustus 2019. They later made treason suspects.

The trial on Friday set in teleconferencing mode. The six defendants stayed at their detention, while the panel of judges, prosecutor and lawyer attended the Courtroom. The public prosecutor read the first lawsuit against Arina Elopere a.k.a. Wenebita Gwijangge. The public prosecutor charged her guilty to commit treason against the State by intentionally abdicating the entire or a part of the State’s territory to the enemy or to separate a part of the State’s territory as referred in Article 106 in conjunction with Article 55 Paragraph (1) to 1 of

the Criminal Code. For this reason, the public prosecutor asked the panel of judges to impose her one year and five-months sentence.

The second charge was for the defendant Anes Tabuni alias Dano Anes Tabuni. Similar to the first charge, the public prosecutor found him guilty according to Article 106 in conjunction with Article 55 Paragraph (1) to 1 of the Criminal Code. He also asked the panel of judges to impose the defendant one year and five-months sentence.

Concerning the hearing, the five defendants’ legal advisor (Arina Elopere, Anes Tabuni, Paulus Suryanta Ginting, Charles Kossay) Ambrosius Mulait had protested against the panel of judges for not allowing them to read the statement of expert witnesses. Previously, in the hearing on 27 March 2020, the panel of judges promised to hear the reading of written statements by expert witnesses proposed by the defendants’ legal advisors.

“This is obviously detrimental for the defendants. Their rights to obtain and present witnesses or experts in the hearing as referred to Article 65 of The Criminal Code has been violated,” asserted Simomora in the press conference by the legal advisors’ team.

The next trial is scheduled for 13 April 2020. In the hearing, the advocate team planned to read the plea/defence memorandum on behalf of the Papuan political prisoners and the statement from experts who testify for the defendants. (*)