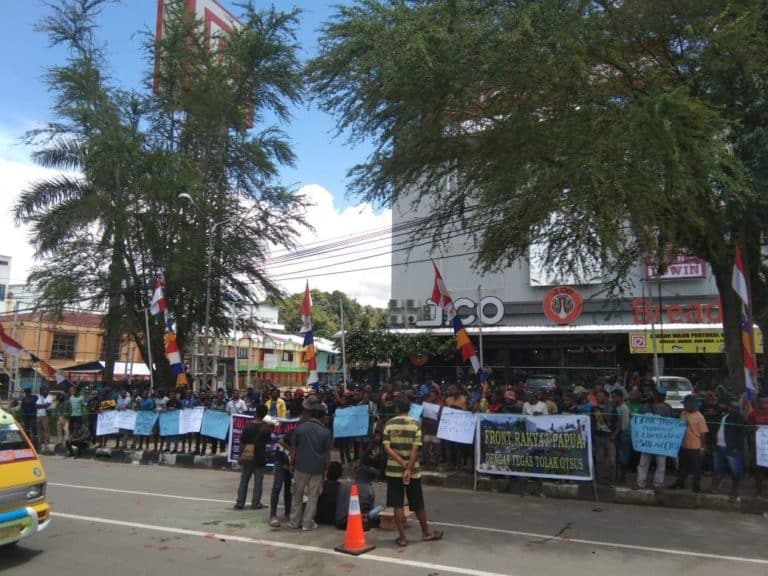 Jayapura, Jubi – A number of youths, students, and Papuan and non-Papuan communities held a peace rally on Thursday (10/9/2020) to decline the Special Autonomy phase II in Papua. The rally occurred at around 10 am Papua time in Jl. Jendral Ahmad Yani, Sorong City, Papua Barat Province.

The Protest Coordinator Herman Walilo gave a speech to the crowd and followed by representatives of each element participated in the rally. About fifty protesters who joined the rally stayed inside the rope peaceably.

The First Secretary Apey Tarami said this rally was the initiative of the Solidarity of Papuan People’s Front as the representation of people in refusing the idea of special autonomy.

“Special autonomy, in our point of view, is a kind of sweet that its sweetness we never taste,” stated Tarami in a press release from LBH Kaki Abu received by Jubi in Jayapura on Thursday (10/9/2020).

“This protest does not end here but will continue until we reach our goal. The Special Autonomy is only used as a bargain from the Indonesian Government. It is not a democratic solution to address Papuan issues. Also, this is not what Papuan people want but the aspiration of certain people. The elites who are concerned about the special autonomy fund. But we, people, believe there is no justice for us (through the special autonomy policy),” added Tarami.

In the meantime, the Second Secretary Soni Assem said that starting today Papuan people must understand that the special autonomy is a bargain to exploit natural resources in Papua.

“Therefore, we hope people should be together to reject the extension of special autonomy policy in this land,” he said.

Assem added that the special autonomy is a colonial system legalised by the Indonesian Government towards Papuan people.

“Therefore, today I ask all Papuan people to decline the Special Autonomy Phase II in any form. As a Papuan, I firmly decline the special autonomy and we want a referendum as a solution to democracy,” he said.

Meanwhile, Johan Djamannona, a non-Papuan student who joined in this solidarity, said the special autonomy did not contribute anything to Papuans. Therefore, they declined it, and he supported them because it is the constitutional rights of Papuans to decline a policy which does have any impact on their lives.

“We will remain in solidarity as a part of our concern towards what has happened to Papuans. There are so many problems that have occurred but the government seems not to have the intention to solve it. Instead, it intensifies the problems such as to extend the special autonomy policy which was clearly rejected by Papuans,” said Djamanmona. (*)

DPR PAPUA: PEOPLE’S PARTICIPATION IN THE PRESIDENTIAL ELECTION HAS DECRASED DUE TO LACK OF SOCIALIZATION