Papuan people demand the President to withdraw troops from Nduga 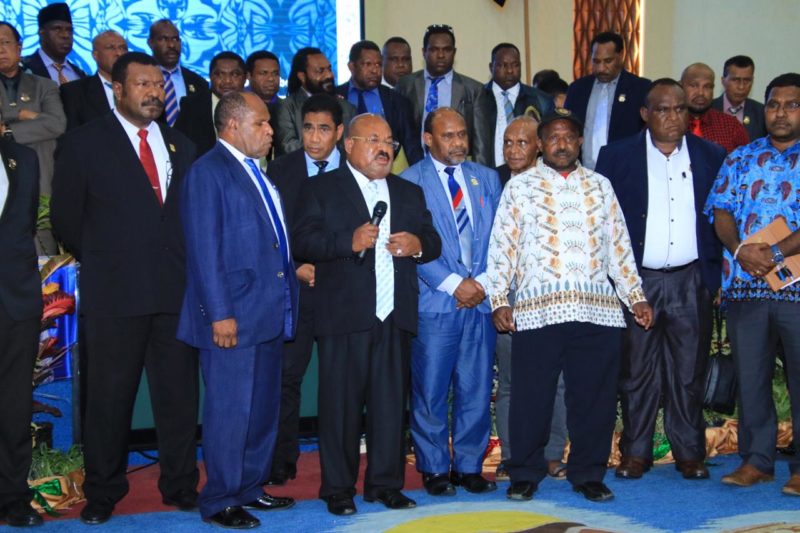 Jayapura, Jubi – Governor of Papua, Papua provincial parliament (DPRP), Papuan People’s Council (MRP), Papua Representative Office of the National Human Rights Commission, church and Papuan people urgently demand President Joko Widodo (Jokowi) to immediately withdraw troops from Nduga. The presence of the military and police in Nduga has triggered trauma among the villagers in that regency that they have fled to the forest.

This demand was authorized during non Regional Government Budget plenary meeting held at the Papua provincial parliament on Thursday (20/12/2018).

“We have all attended the plenary meeting of Papua provincial parliament relating to the incident in Nduga. Thus, the stance of the provincial government, the Papua provincial parliament, the Papuan People’s Council, the Papua Representative Office of the National Human Rights Commission, the church and civil society organizations is clear. We demand President Jokowi to immediately withdraw troops from Nduga,” said Papua Governor Lukas Enembe after the plenary meeting.

The troops withdrawal, according to Governor Enembe, must be undertaken so villagers in the regency can celebrate Christmas in peace. During Christmas time like this, Governor Enembe continued, there cannot be military or police in Nduga, particularly in Yali, Yigi, Mbua and Dal districts where the armed conflict claimed over 20 lives.

“We grieve for both previous and current deaths. But that is enough. There cannot be any more civilian victims,” said Governor Enembe.

Regarding the conclusion of this plenary meeting, the head of Papua provincial parliament Yunus Wonda, stated that the entire seven factions of the parliament agree to withdraw military and police from Nduga and to establish an independent team. This independent team will work to collect data relating to the incident in Nduga. The team consists of the provincial government, Papua provincial parliament, Papuan People’s Council, church, Papua Representative Office of the National Human Rights Commission, and Papuan civil society.

“So this is the wish of Papuan people. This team is not just for the incident in Nduga. But also for all violence and conflict incidents on the land of Papua which have caused Papuan civilians to be harmed, traumatized or died,” said Yunus Wonda.

Relating to the security forces’ approach in responding to the Nduga shooting incident on 2-3 December, Enembe said that people in the regency should had been asked to leave the area or were evacuated prior to the military and police pursue the West Papua National Liberation Army (TPNPB) who claimed to be the shooters.

“Yet this is not it. The military and police set foot in before evacuating the people. Therefore, we demand the withdrawal,” continued Enembe.

As a person who used to be a regent in Puncak Jaya, the other regency where armed conflict often occurs, Governor Enembe admitted that he really knew TPNPB’s strategy. After carrying out attack at one location, TPNPB will go out from that location so that there are only civilians left.

Hence, Governor Enembe emphasized that the first step desired by the Papuan people is that the president must withdraw the troops. If the military and police were not yet withdrawn, no further step could be taken, not even sending food supplies.

“People who have fled to the forest cannot find food. We could neither send food nor collect data and facts if the troops had not been withdrawn. This troops withdrawal is the first step which determines the next steps. Accordingly, we will request to see the president to deliver this demand in this near future,” explained Governor Enembe. (*)

Two residents of Papua’s Serambakon missing since May