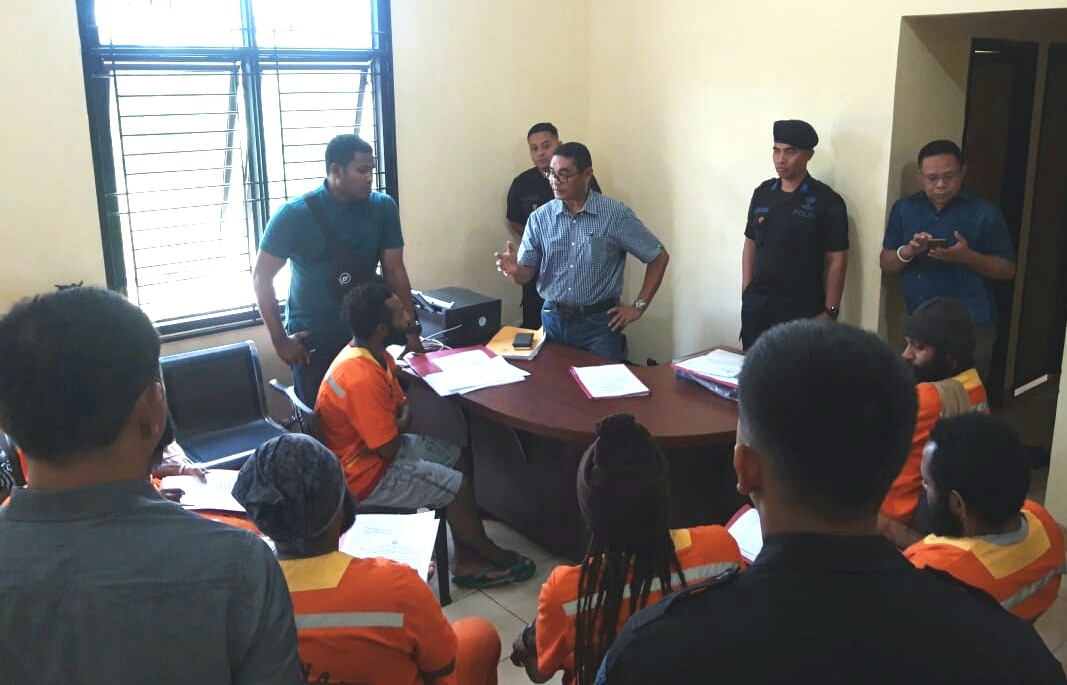 Illustration, Papuan political prisoners in Kalimantan Timur during their transfer from General Attorney sometimes ago. – Jubi/Doc

Document on political prisoners and Nduga casualties are not Vero’s. The coalition law enforcement and human rights in Papua have been doing the research and compilation on it.

Jayapura, Jubi – Gustaf Kawer, Director of Association of Law Enforcement and Human Right Advocates in Papua (PAHAM) said the document on political prisoners revealed by human rights activities Veronica Koman is valid, as the coalition has been working on the record.

“Victims details in Nduga, are also prepared by members of the human rights coalition advocating the victims in Nduga,” he said on Sunday (16/2/2020).

Kawer further explained why they use the terminology of political prisoners in the document. It refers to allegation and article used for accusing the fifty-seven detainees. “So, all prisoners that Vero mentioned about have been accused using the treason article, not public speech or common crime,” he added.

The document reveals that 57 political prisoners detained in different locations, respectively Jakarta (6 detainees), Balikpapan (7 detainees), Jayapura (1 detainee), Manokwari (5 detainees), Sorong (15 detainees) and Fakdak (23 detainees). Kawer explained that they were arrested because of their activity categorised as part of the independence movement.

This accusation has become a foundation for PAHAM to identify them as political prisoners instead of criminals. He asserted that the Papua Police Chief and all relevant parties should not give a rush statement that might increase the public disappointment in attempting the human rights enforcement in the Land of Papua. According to him, it would be wise if they do a crosscheck on the 57 political prisoners mentioned by Veronica.

“If the data is valid, the regional police must act professionally to solve it,” he said.

Further, he took an example on the human rights violation in Nduga. This case, according to him, should have been followed up like the Paniai case. Those who proven not involved in the riot must be released.

“Similarly, those who involved in the riot should not be accused using the treason article, but another article,” he said.

PAHAM also asks all parties to see the reality of how the perpetrators of racist taunts got the light sentence, while Papuans accused with the substantial article (Treason). He asks all parties in Papua to object the errors by the central government in responding to Veronica’s statement about the human rights violation in Nduga and political prisoners.

Earlier, Veronica Koman handed document consisting the names of 57 political prisoners and 243 details of death victims among civilians in Nduga, Papua to President Joko Widodo in his official visit to Canberra, Australia on Monday (10/2/2020). The human rights violation case in Papua, including Nduga refugees, has been highlighted or became a spotlight of some parties in Australia. (*)