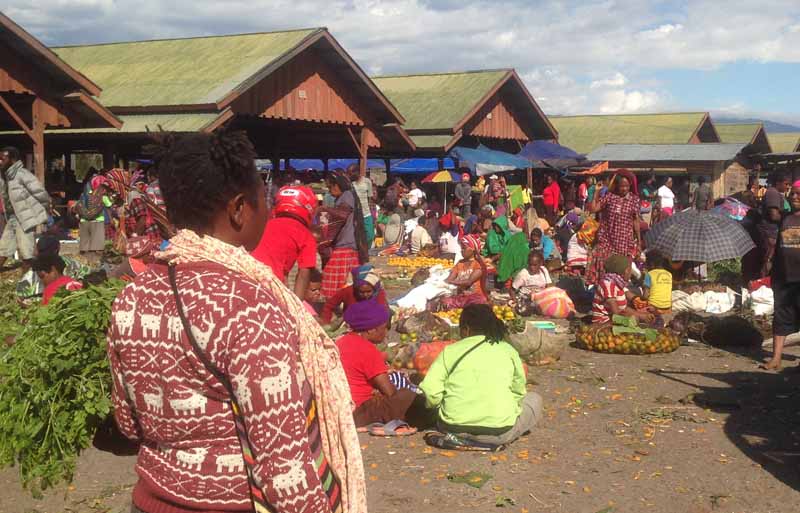 Jayapura, Jubi/BeritaBenar – “We have our vegetable garden, but if it has not yet ready to be harvested, we must go to Youtefa market every 3 am to buy some vegetables and take it home. Then at 3 pm we bring it to the market for reselling,” Yuliana Pigai told BeritaBenar at temporary traditional market for Papuan women entrepreneurs.

Mama Yuli, as she is often called by her colleagues at Papua Traditional Market, said after buying some vegetables at Youteva market, she will do other domestic works and then go to her vegetable garden. She will take care of her plantation until 12 pm. Then she will go home and prepare going to the market for selling vegetables.

While other Papuan women who sell local commodities at Temporary Traditional Market for Papuan Women said they only get a few for daily income.
“We can earn between a hundred to three hundred thousand rupiahs everyday, but everyday we need about 150 thousand rupiahs or more. We all know that the living cost in Papua is the most expensive,” said a woman trader Hermina Hubi.

Backbone of the Family and Papua Economy
Most of these tough women are married. But some had abandoned by their husbands and should bear the family’s burden alone. Some are married to the husbands who have no regular job or work as civil servant, but none of those husbands gave their income to the wives.
“If they got paid, they never gave us their salary. We don’t know what do they do with it. If we are not selling vegetables at the market, who’s going to pay our children’s school fee? Who’s going to feed our children?” said Mama Hermina whose husband works as civil servant at the Papua Governor Office.

She further admitted the Temporary Traditional Market for Papua Women is the only place she could access since in other market places she must compete with non-Papuan traders and certainly defeated. She also cannot trade at a town street of Jayapura City because it’s already full with other traders.

There are thousands of Papuan women who are struggling to support their family such as Yuliana Pigay and Hermina Hubi. At the Temporary Traditional Market for Papua Women located at the central of Jayapura City, there are dozens of women selling vegetables, fishes, fruits and other local commodities. And hundreds of those women sell their commodities on the roadside along the road to Jayapura to Sentani.

There are many Papua women in other regencies who undergo the daily cycle of life just like these two women at the Traditional Market for Papua Women.

Demand the President’s Promise to Build A Market
During his visit at the Temporary Traditional Market for Papua Women when doing campaign in June 2014, the President Joko Widodo promised to build a permanent market for Papua women. In front of hundreds of Papua indigenous traders, Jokowi mentioned to build a market for Papua women is one of is priority program if he was elected as president.
“I personally gave the letter to Jokowi when he did his campaign in the market. He promised to build a market for us. He invited me to come to Jakarta at his inauguration day as president. I reminded him about his promise once again at that time. But until now, there is no sign that our market would be built,” Mama Yuli, who received a rice cone from President Jokowi in People’s Celebration to celebrate the inauguration of Jokowi-JK in Jakarta in October last year.

Papua women have done their struggle to materialize a market for them since 2003. Their demand is not exaggerated because it is according to the Law No.1/2001 on Special Autonomy for Papua Province in which includes three key words of Empowerment, Protection and Alignment towards Papua Indigenous People.

Assisted by the Solidary of Papua Indigenous Trader (Solpap) that is consisting of civil society, professional and journalists, Papua women traders never stop to voice retheir aspiration on having a traditional market.
“The issue on market development has been politicalized. Local politicians used it for their own interest. The President of Indonesia has instructed the development of this market, but the Provincial and Municipal Government and Papua Legislative Council point each other,” Solpap Coordinator Robert Jitmau told BeritaBenar.

“We fought since 2003, the result is the Provincial Government could only provide the temporary market. While the permanent market as promised by Jokowi has not yet come in realization,” he added.

It’s Still A Promise
In the separate place, the Chairman of Commission IV of Papua Legislative Council for Infrastructure, Boy Markus Dawir said the initial budget had allocated in the revised Regional Budget of Papua Province 2015 amounted Rp 4.3 billion.
“The construction might be start in October and the entire work would be full implemented in 2016. It’s expected complete in 2017 and Papuan women would have a market. The Commission IV who’s responsible on the building of this market would keep it on track. So, Papuan women to pray it would be running smoothly as expected and could be finish immediately,” Boy Dawir said.

The planning of market development takes time due to the land issue. The Head of Development and Fresh Water of Public Work Office of Papua Province, Yan Ukago, told BeritaBenar that the market would be built in the location of current Damri (State Bus Office) terminal. Thus it should be reallocated first.
“What I should deal is how to reallocated Damri terminal to new location at Pasir II that is currently a main workshop. It causes a delay for the market development for Papua women,” Ukago said.

However, both Yuliana Pigai and Hermina Hubi do not want to know the reason used by bureaucrats and legislators. They only knew that Jokowi, the President of the Republic of Indonesia, gave them a promise of a market so they will able to support their family, and that’s they want. (Victor Mambor/rom)

The price is expensive in Papua, Apindo: “we did not take much profit”

Poverty in Papua Should be Addressed, says Indonesian Legislator

Japan and US Potential Markets for Manokwari Fisheries Products