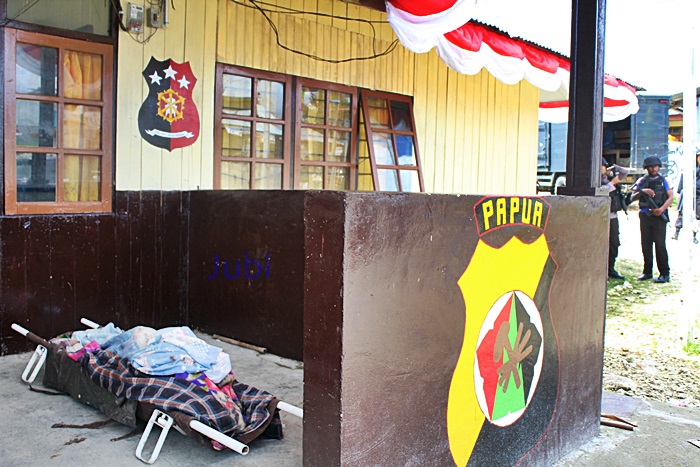 Jayapura, Jubi – Papua Regional Police pledged to guard the completion of the shooting incident case in Kampung Oneibo, Deiyai ​​Regency Papua and to settle the case according to legal procedure.

“Brimob (police mobile brigade squad) has also claimed that the gunmen are their members, this mean that they are open. So let’s work together to get the process done,” he said.

He claimed that the police did not conceal the embarrassing event, let alone the incident happened with many people witnesses.

Deiyai ​​parliament member Alfred Pakage on the occasion asserted that for the future there could be no more shooting of his people, because God created man in the world to protect and care for each other.

“My people should not be killed. There should be no shooting instructions. I am very sad; my people were killed like animals,” he said.

He warned Human right commission (komnas ham) of Papuan Representatives who conduct investigation to be serious about handling the case until it goes to the court.

On a separate occasion, Head of Oneibo Village, Marius Pakage told Jubi that the Brimob officers who shot civilians in Deiyai ​​shot them within 15 meters.

“After shooting dead, the Brimob says ‘where do your weapons?’ Brimob fired at a distance of 15 meters. When the shootings, I stand in between the children (shooting casualties) and Brimob then I lift my hands as a peace sign. At that time I wear my clothing complete with Garuda (Indonesia official symbol of state),” explained Marius Pakage who is also one of the victim witnesses in the incident.

He recounted, the Brimob who were then using the complete attribute (black shirt) came from the side of PT. Dewa corporate camp. Then, they turned back with patrol vehicles (four cars), one truck, one Hilux double gardan car owned by the company.

Shortly thereafter, the shooting took place. The shooting did not aimed to the air because he felt some guns pointing at him. So did the children standing around him.

“Suddenly I see the children were falling, some of them ran to the water to col their wounded bodies from  the heat out of the bullets,” he explained. (*)

From 132 mining operation in Papua, only 79 with clean and clear