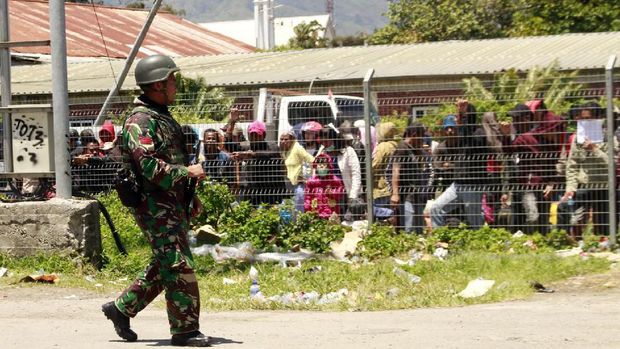 Papua, Jubi – Papua Regional Police are still investigating some cases of firearms and ammunition trafficking from abroad into the region. It follows up the increase of shooting terrors against military and police officers by unidentified groups in various areas of Papua.

“Indeed, we have information that firearms trafficking is not only from domestic sellers but also from abroad. There are indications that it comes through the border area, and from the Philippines via North Maluku, Sorong, West Papua Province into Papua. This route what we are tracking now,” he said in Timika as reported by Antara on Monday (13/1).

Furthermore, General Waterpauw asked the local community to provide support and assistance to notify the authorities if they have information related to the transaction of firearms and ammunition. Therefore, the authorities could stop the trading and at the same time be aware of the syndication network and take the perpetrators to the court.

Meanwhile, Mimika Police’s Special Force and Battalion B of Police’s Mobile Brigade have investigated some witnesses for information. Some of them are the local garbage truck drivers who are suspected transporting ammunitions with household waste to be disposed at the Waste Disposal Site at Iwaka Sub-district and heavy vehicle operators on duty at the Iwaka landfill site.

Dozens of ammunition with the active launcher were first discovered by Hendra (17), a heavy equipment operator at the Iwaka landfill site on Tuesday (12/31/2019).

Based on Hendra’s information as reported by Darjo, a fellow operator at the Iwaka landfill, the ammunition wrapped in a plastic bag and transported to the landfill by a regional government garbage truck with hull number 10 with plate number DS 9593 MA.

Once opened, it is known that the plastic package contains ammunition of 10 grains of 5.56.5 TJ.

Then on Wednesday (1/1) at the same location, two GLM launchers and 50.56.5 calibre AMM ammunition were also found. The findings were then handed over to the Papua Police Regional Battalion Brimob B officers.

Currently, three civilians involved in the transaction of 600 ammunitions are undergoing trial in Timika District Court and have been pronounced for six years and five years sentence respectively.

While two Indonesian soldiers who involve in the case underwent hearing in the Jayapura Military Court but one suspect was found dead in his detention at Military Detention Center in Waena, Jayapura on Monday (6/1/2020)

“Where did it come from, this is what we are currently investigating. From there, it will reveal the culprits who pulled those ammunitions and throwers from arsenals,” he said.

Regarding firearms trafficking involved military members and police officer, Inspector General Paulus Waterpauw reminded his subordinates in Papua to not involve in the illegal firearms and ammunition trading. He stressed that there would be no mercy for those who catch in the act involving in the trafficking.

“I hope our members do not take advantage of this space for involving in ammunition trading, so on and so forth. In principle, for those who are indicated and proven to be involved, there would be no mercy for them. We will surely fire them disrespectfully and take them to the court,” he launched his statement in Timika on Monday.

However, the chief believes that most police officers serving in Papua have high integrity and loyalty. But, according to him, an individual member also can commit such a deviant act. (*)