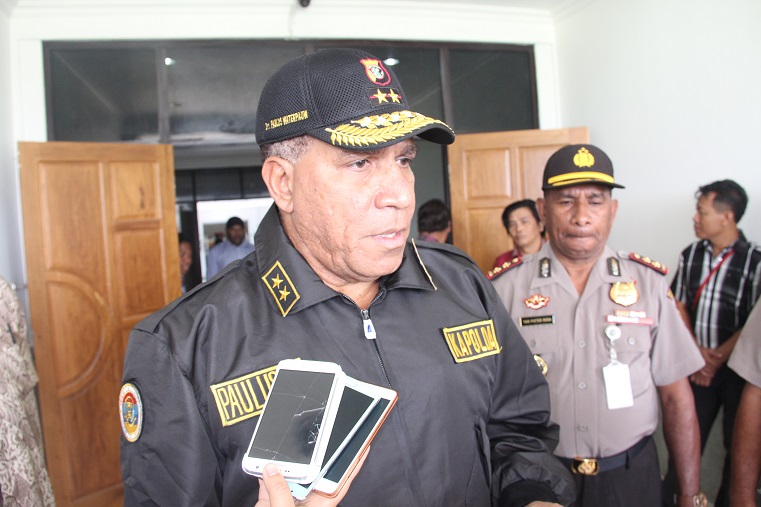 Wamena, Jubi – Papua Police would issue rules on public expressions in a move that many fear will curtail free speech.

Papua Police Chief Inspector General Paulus Waterpauw said everyone has right to express their opinion in public, but for such groups such as KNPB, PRD who advocate for separatism, there are legal consequences.

“We will specially record those who are against the legitimate government. There will be legal consequences and it is regulated in the Criminal Code,” he said in Wamena, Jayawijaya Regency on Friday (17/6/2016).

He said those who conduct a demonstration on the issue of separation from the Republic of Indonesia could be charged with treason and would be on a police criminal record if convicted.

He explained if someone has convicted of crime, they would have the police criminal record. For students who want to continue their study, the record would be attached with them. It’s also applied to the graduates apply for a job; this record would prevent them in the future.

He also asked to the regents in Papua to identify the pupils and students funded or financially supported by government.

“They shouldn’t get involved that finally made them trap in the situation that ultimately harm themselves,” he said.

In response the chief, Papuan political prisoner Philep Karma said this notice would merely to rise the number of political prisoners in Papua, because many activists and indigenous Papuans, in particular KNPB who conduct the protest demanding the truth of Papuan history to the self-determination.

“The more political prisoners, the issue of Papua will increasingly global. It means the president would feel more complicated, isn’t he?” he said to Jubi on Monday (20/6/2016).

On the last few days, the demonstration was flaring in Papua, whether held by West Papua National Committee in Jayapura on 3 May 2016 and 15 June 2016 respectively or White-Flag National Group in Wamena in last month and Thursday (16/6/2016) or the National Front (BARA NKRI) in the early June. It seems they are competing against each other.

The Coordinating Minister of Politic, Legal and Security Affairs Luhut Binsar Pandjaitan considered the demonstration is the citizens’ constitutional rights and there’s no problem as long as it is according to the Law and not anarchistic.

“But if it breaks the Law, off course there is a legal consequence, and should be considered,” he told reporters after meeting with Jayawijaya leaders in Wamena on Friday (17/6/2016). He also asked to Papua Police Chief to review the permit for demonstration, because everything has consequences.

“Governor also must form a regulation related to the demonstration, for example, in Jakarta the demonstration was allowed to conduct from six in the morning to six in the afternoon. Secondly, it could be done at particular places and not allowed for violating the rights of other people,” he said. (Islami Adisubrata/rom)

Formation of Melanesian Region is a Strategy to Sabotage MSG