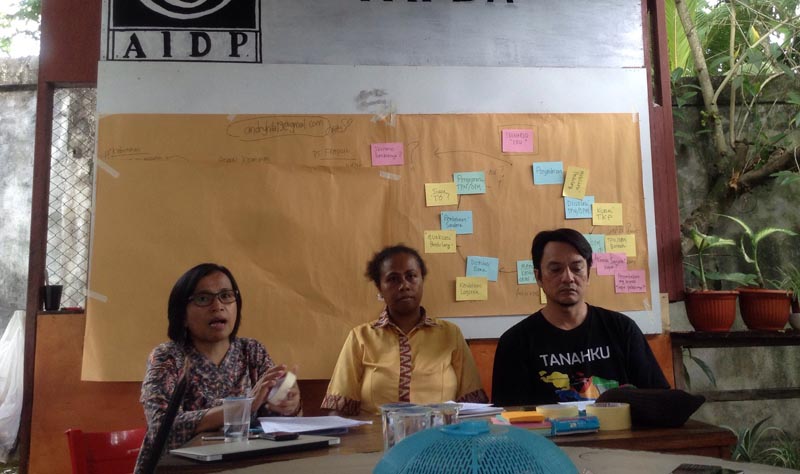 Jayapura, Jubi – In October 2017 there has been a series of shootings in Banti, Kimbeli and Utikini villages located around PT Freeport Indonesia area.

The series of shootings to the evacuation of communities in the three villages, according to Civil Society Coalition for Papua’s law enforcement and human rights, consisting of 25 Civil Society Organizations, is happening through scenarios played by the powerful.

Latifah Anum Siregar, Director of the Democratic Alliance for Papua (AIDP) said many people asked the real reasons behind evacuation of people from three villages while the area is their ancestral land.

Anum added, the constellation in Tembagapura became the main topic in the coverage of several mass media both local and national. News about what happened around the mining area Pt. Freeport Indonesia is massive. Unfortunately, it was not accompanied by compliance with Law 40 regarding the press and journalist code of ethics.

“Who said there was a hostage? The use of a hostage phrase by the mass media has unwittingly caused a negative impact to Papuan indigenous students studying in several cities of study in Indonesia. The students were bullied by the local people for news with the hostage phrase” she said.

In the same occasion, Director of Secretariat of Justice, Peace, Integrity of Creation (SKPKC) of Franciscan Papuan, Yuliana Langowuyo added that if there was any hostage it would always be followed by a demand.

For example, the case of Woyla aircraft hostage taking place in 1981 in Thailand demanded that fellow detainees held in custody post Cicendo events in Bandung, West Java, to be released.

“Well the case in Tembagapura what is the demand from the hostage taker reported by the mass media? The media should have verified any data obtained in the field, whether it was from the police, TNI, arms groups or community, to make it balanced and accountable,” he said.

It was proofed by the people in Banti who had been interviewed by one of the international media that said they are not in a hostage situation. They are free to move as usual, but if they intend to leave the village, their security cannot be guaranteed by the group accused of being a hostage taker.

“Police also disagree, such as Mimika Resort Police who rejected to use ‘hostage taking’ phrase in calling the situations in Banti and Kimbeli villages and prefer to use ‘isolated’ phrases, while top-level police continue to use hostage phrases and continue to dominate the news on the conflict in Timika. Who is controlled the media? ” she said.

To that end, Wirya Supriyadi of the Papuan People’s Network (Jerat) hopes that the mass media or national press should not become an institution that is only a tool to justify the statement of certain parties but rather to fulfill the people’s right to get true information, to uphold the basic values ​​of democracy, and to promote the supremacy of the law.

“Their roles are to conduct monitoring, critic, correction and suggestions on the matters relating to public interest and fighting for justice and truth. We also urge the security forces in this case the TNI and POLRI to stop disseminating information without clear evidence and facts related to violent and armed conflict that occurred in Tembagapura,” he said.

Wirya added, in addition he also hopes journalists, mass media and the national press to run the principle of independence of the press responsibly, especially to verify any information received.

“PT Freeport Indonesia must also immediately explain what has really happened in the villages of Banti, Kimbeli, Utikini, and surrounding areas because the villages are located in the mining area of ​​PT Freeport of which is located in the concession area of ​​the company and required a special identity to get into that location. How come the illegal immigrant community makes their livelihood in the areas? Who gives permission? This is a big question that should be explained by the company, ” he said. (tabloidjubi.com/Zely)

The Chronology of Mass Arrest in West Papua on May, 2nd