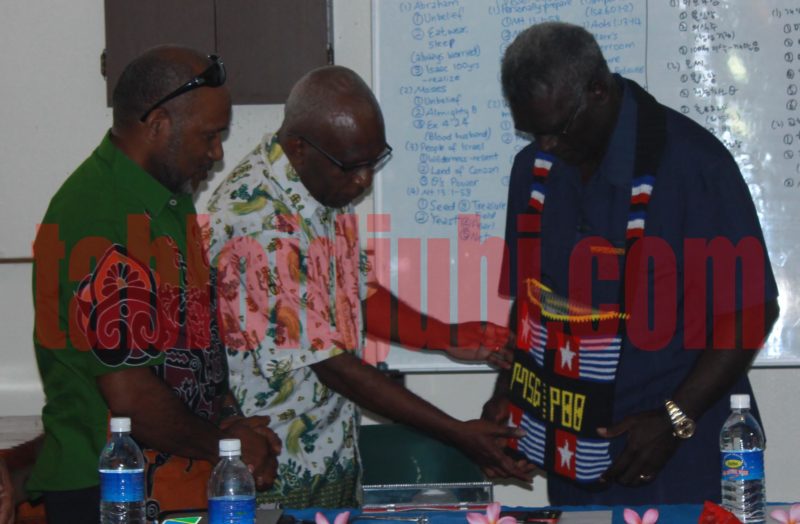 Jayapura, Jubi – The Pacific Coalition on West Papua (PCWP) is gaining momentum with the addition of two new members and the confirmation of the membership of two other parties who indicated their profound support for the initiative since its introduction in Honiara, Solomon Islands in July this year.

The PCWP was initiated by Solomon Islands Prime Minister Manasseh Sogavare who is also the Chair of the Melanesian Spearhead Group with the aim of securing the support of the wider Pacific region for preposition of taking up the issue of West Papua with the United Nations for intervention. The initial membership comprises Solomon Islands Government, Vanuatu Government, Front de Liberation Nationale Kanak et Socialiste (FLNKS) and the United Liberation Movement of West Papua and the Pacific Islands Alliance of Non-Governmental Organisations (PIANGO).   The two new members are the governments of Tuvalu and the Republic of Nauru who were represented by Prime Minister Enele Sopoaga and Nauru’s Ambassador to the United Nations, Marlene Moses.   The other two parties who indicated support for the initiative when it was introduced in Honiara at the margin of the 4th Pacific Islands Development Summit are the Kingdom of Tonga and the Republic of Marshall Islands.     The expressed support of the governments of these two countries was confirmed with the attendance of Prime Minister Akilisi Pohiva and the Republic of Marshall Islands Minister for Public Works, David Paul.   All the initial PCWP members were represented at the meeting in Honolulu Friday except for the Republic of Vanuatu Government. The Secretary-General of the Pacific Islands Forum, Dame Meg Taylor was also present at the meeting.   In his opening remarks, Prime Minister Sogavare said the nations of the Pacific have a duty as closest neigbours to West Papua to address the issues of concern to West Papuan.   He said the right to self-determination being denied to the people of West Papua since the last 50 years is a fundamental principle of the United Nations Charter, just like the rights to life and dignity that they are also denied as a result of their self-determination pursuit.   He added that the intention of the PCWP is perfectly in line with the principles of human rights and democracy, the very basis of the UN Charter, which all UN Member states should adhere to and protect.   Prime Minister Sogavare said it would not be an easy task to unwind the wrongs that have been perpetrated by the complications and cover-up on the issue of West Papua over the years and this is where the need for collaborative and strategic approaches to this issue comes in.   “Only by working together and strategically dealing with the issue of West Papua can we accomplish the objective of our mission,” he said.   PIF Secretary-General Dame Taylor in her contribution to the discussions presented the forum’s position on the issue. She said the 46th PIF Summit in Port Moresby in 2015 resolved to send a fact-finding mission to West Papua, however the Indonesian Government sees the term ‘fact-finding’ as offensive and therefore that resolution impending implementation.   Dame Taylor said she has meet with the PIF’s Chair, Prime Minister O’Neill of Papua New Guinea and also the Indonesian President on the way forward on the resolution and the PIF’s Chair will meet with the President.   The Secretary-General of the ULMWP, Octovanius Mote said the ULMWP represents the freedom movement of West Papua, which continues to pursue the rights of West Papuans to their land, self-determination and all other human rights enshrined in the United Nations Charter.   Prime Minister Sopoaga of Tuvalu said his country fully appreciates and sympathises with the aspirations and wishes of the people of West Papua to be on their own and fully realises their rights to exist as a country and determine their own continuation as a people.   The Pacific Coalition of West Papua members and friends discussing the way forward for the struggles for self-determination by the people of West Papua.   Minister Paul of the Republic of Marshall Islands said his country sees the issue of West Papua from a humanitarian perspective and humanitarian issues are at the forefront of the Marshall Islands Government.   The FLNKS representative, Rodrigue Tiavouane said the FLNKS fully supports the PCWP initiative and the strategy by which it will be implemented.   He said the FLNKS went through the same process with its self-determination bid- starting with the Melanesian Spearhead Group then on to the Pacific Islands Forum and finally the UN Committee 24 (Special Committee on Decolonisation).   Prime Minister Pohiva of Tonga said it is a moral obligation to address the human rights abuses in West Papua and deteriorating conditions and call for self-determination and independence.   He said at the 70th United Nations General Assembly last year he spoke of how the objectives of good governance and accountability are all impossible without full support for human rights of people in areas of conflict throughout the world including the Pacific Islands.   Ambassador Moses of Nauru said it is important that the issue of West Papua be taken to UN C24 and to be successful it is important for the Pacific to have strong leadership in pursuing it in a strategic manner.   She said what works some people does not always work for others.   PIANGO Tonga Member, Drew Havea said he was encouraged by the leadership on the issue of West Papua displayed by Prime Minister Sogavare.   He said PIANGO acknowledges the pain of the people of West Papua as the pain of the Pacific and would like to urge Pacific leaders to come to an agreement to stop the violence in West Papua and find a peaceful and dignified pathway to self-determination.   The meeting concluded with the expression of commitment by all PCWP members to their mission objective. (*) SOURCE: SOLOMON ISLANDS PM’S PRESS SECRETARIAT/PACNEWS

Mopah Airport Closed Due to Volcanic Eruption in PNG

Help Us Fight for Independence – West Papua Calls on Ghana

Leader calls for New Zealand to stand with West Papua