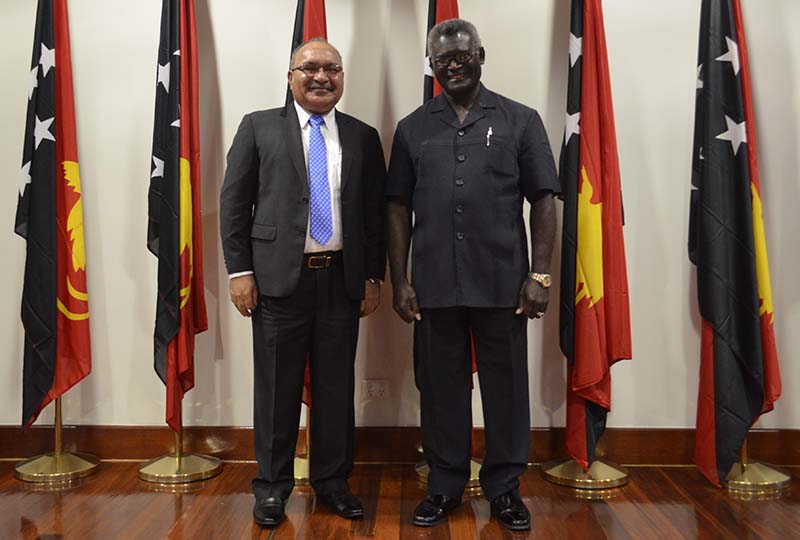 The MSG Chair met with Hon O’Neill in the PNG Capital, Port Moresby yesterday, concluding his second and final round of consultations with MSG leaders since taking up the chairmanship of the Melanesian sub-regional grouping in June 2015.

The key issues of discussion included the following:

He said a Special Leaders’ Summit was supposed to be held to approve the recommendations from various bodies of MSG including SCLII.

However, the MSG Chair said the various bodies of the MSG- SCLII and Senior Officials Meeting (SOM)- did meet and made a number of recommendations to the Foreign Ministers Meeting (FMM) for submission to the Leaders’ Summit for final approval.
He said the MSG Capitals’ visit was therefore important to consult with colleague leaders on various recommendations from the various MSG Bodies for final approval

“I have met with both Prime Minister Charlot Salwai of Vanuatu and Victor Tutugoro of the FLNKS in Port Vila and Prime Minister Frank Bainimarama of Fiji in Suva as part of this second and final round of consultations earlier in February this year. I was supposed to travel on to Port Moresby to meet with Prime Minister Peter O’Neill but had to postpone the Port Moresby leg of the trip because the PNG Parliament was in session.

“I am now pleased that I finally met with Prime Minister O’Neill yesterday and my meeting with the PNG Prime Minister like my previous meetings with my other colleague leaders was very fruitful.”

On the Outcome of the Meeting of SCLII in Port Vila in September last year, the MSG Chair said he informed Prime Minister O’Neill that the meeting endorsed the proposed Revised MSG Membership Guidelines and was brought to the attention of the SOM and FMM in their meeting which immediately followed the SCLII meeting and were endorsed by the Governing Bodies in December 2016.

He said he informed the PNG Prime Minister that Prime Minister Salwai, FLNKS Spokesman, Mr Tutugoro and Prime Minister Bainimarama have all agreed in principle to the Revised MSG Membership Guidelines and during his consultations with them.

The revised guidelines provide a very transparent process for Leaders to deliberate on an application for membership whereby they enhance and protect the decision-making process and respect the reporting structure of the MSG at the Summit level as stipulated under Articles 7 (1) and (2) of the MSG Agreement.

The MSG Chair said Prime Minister O’Neill in turn expressed support for the Revised MSG Membership Guidelines and as such, Leaders will meet and formally approve them at the next MSG Leaders’ Summit.

On the issue of West Papua, the MSG Chair said he told Prime Minister O’Neill that the United Liberation Movement of West Papua’s (ULMWP’s) application for membership of the MSG will be dealt with under the Revised MSG Membership Criteria.

The MSG Chair said the PNG Prime Minister further stated that any discussion on the issue of sovereignty should be taken up appropriately with the United Nations Decolonisation Committee (C24) in New York and the Human Rights Commission in Geneva.

On the issue of MSG Free Trade Agreement, the MSG Chair said Prime Minister O’Neill stated that PNG will be signing up the agreement after sorting out some issues of concern with Fiji.

On the issue of MSG Labour Mobility, the MSG Chair said Prime Minister O’Neill has expressed desire to see this opened up so that Melanesians from other Melanesian countries do not have to apply for work permit to work in PNG and vice versa.

On the issue of Independent Review of the MSG Secretariat, the MSG Chair told Prime Minister O’Neill that the purpose of the review, which started since January pursuant to the Governing Body decision in December for the review to be undertaken. Its bold objective is to ensure a wholly functional, resilient and robust secretariat that delivers on the mandates of leaders.

He said the PNG Prime Minister conveyed PNG’s firm support for the review and offered assistance to the secretariat to ensure the reform is undertaken smoothly and swiftly.

The MSG Chair and his delegation will return to Honiara tomorrow, Friday 17th March. (*)

The office of public works is required to be transparent