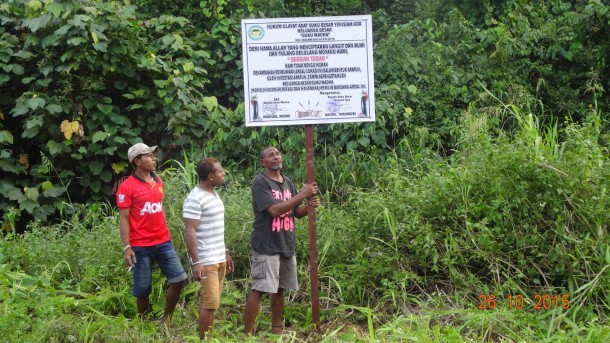 Jayapura, Jubi – Papua Provincial Government believes palm oil can bring prosperity to indigenous Papuans by handing out permits  to palm oil plantations without considering the impact on the environment .

“Because it caused flood disaster, dismissed the people’s livelihood and destroyed the sago forest. Herewith we made statement to reject the oil palm plantation in the land of Papua,” Gobai told Jubi at Intan Jaya Studen Dormitory in Jayapura City, Monday (04/04/2016).

Thus, the Coalition for the Victims of Nabire Oil Palm Plantation asked to the judges at Jayapura State Administrative Court and Sorong District Court to accept a lawsuit by customary people.

Keerom resident Emel Fatagor, who also the victim of oil palm plantation, said a meeting involved all relevant stakeholders in Papua is required in responding this issue.

“Though we have fought for decades for taking back the customary forests deprived by oil palm company; but we (Arso natives) found out recently that PTPN II didn’t have a land concession (HGU) as requirement to open the oil palm plantation. It only has the HGU after sixteen years of conversion of forests into oil palm plantations,” he said.

He explained this fact was revealed during the General Hearing on National Indigenous Customary Law Rights Inquiry in the forest area that was held in Jayapura on 26 – 28 November 2014, or thirthy years after PTPN II was being operated in Keerom. Although complaining about it for several times, but the Arso natives could not do much. Papua border area always becomes a special region, a state military operation area, which is full equipped with military checkpoints at certain distance. It also becomes a hiding place of OPM – Free Papua Movement members. So, it is completed. The existence of PTPN II, OPM and forests in the border of neighboring country are enough for the Indonesian military to put Keerom region as a target of security priority.

“The problem is, the term of security by State has not similar point of Keerom residents,” he said.

Meanwhile, Yerisiam Gua Tribal Chief Dabiel Yarawobi said ‘Save the people and forest of Papua’ endorsed by Papua People’s Assembly and Papua Provincial Government should not apply as an empty slogan, but should become a concrete measure.

“It shouldn’t become an meaningless moral calling or merely fundraising object. This must create a concrete measure for all of us: make regulations, build up the awareness and also take a firm action. Nature would select those who work with forest destroyer investors,” he said.

In this forum, he also talked about oil palm in Mimika, which standing along the road of Mimika to Paniai. (Abeth You/rom)