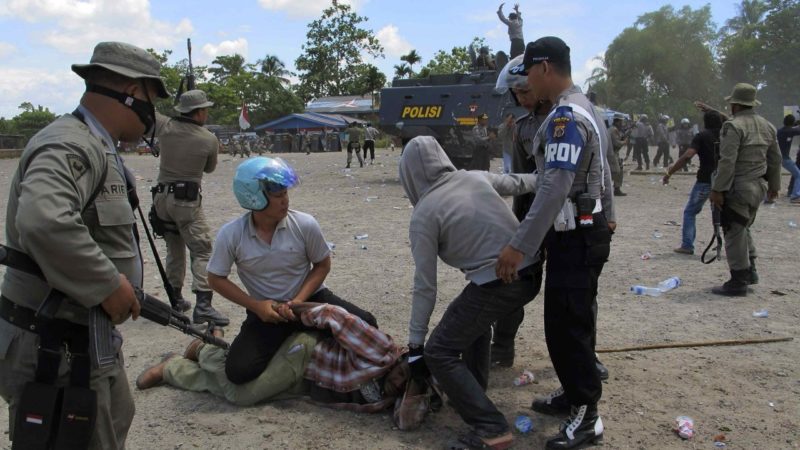 Illustration of an arrest of indigenous Papuan in Timika in 2015 - reuters.com

Illustration of an arrest of indigenous Papuan in Timika in 2015 – reuters.com

By Adriana Elisabeth* for the Conversation

In early November, police reported 1,300 people were “being held as hostages” by a “group of armed criminals” in the villages near Tembagapura, Papua, a district that holds one of the largest gold and copper mines in the world, owned by Freeport Mc-Moran, the US mining company.

The media followed with reports that the Indonesian Military (TNI) and the National Police (Polri) had rescued around 300 non-Papuans. However, the National Committee for West Papua (KNPB), a local political group which supports Papuans’ right to self-determination, said the news about the hostage was not true.

The news prompted public speculation on the alleged hostage perpetrators, their motives, and the conflict of interest taking place in the event. Speculations abound about the source of the heightened tension starting from ideological reasons of attacks against nationalism, political reasons related to the pro-independence movement, to pragmatic reasons related to security business for the companies there, which implicates many actors.

The reaction from the public is partly due to Papua’s history. Since the 1970s, in Papua, there has been a pro-independence movement which requested for another referendum. The result of Act of Free Choice (Pepera) referendum in 1969 which was attended by 1,022 government-chosen Papuan delegations, authorised Papua as part of Indonesia. However, there are many Papua’s pro-independence who feel that Pepera was conducted under the military pressure.

Events in Tembagapura may point to a relationship between the business and security sector in Papua, which involves various actors who tend to use each other. A company like Freeport often spends special funds to make sure that their operations are safe, sometimes by asking protection from TNI and Polri.

The police has reported that the “hostage” is related to competition or tailing areas between migrants and native Papuans. If this is true, then the police should deal with this using law enforcement approach.

However, if the soldiers of the Free Papua Movement were responsible for the hostage taking as claimed by the military, then it is the domain of the Indonesian military.

The strategy to ensure security in Papua should be carefully thought out due to this mix between political and economic interests in Papua.

Using a state perspective, Tembagapura case should be thoroughly managed to restore stability and security. However, if the government goes overboard in restoring security via a military operation, Indonesia will be deemed inconsistent in its commitment to Papua’s development, especially if the security is ensured at the expense of human rights principles.

The dynamics in Papua is closely related to political interests. The conflicting interests between the government and people of Papua have created a deep sense of distrust between the two.

Human rights activists and some Papuans often paint government efforts to improve the conditions in Papua as a way to marginalize local people. The government and investors have been criticized for grabbing customary land of Papuans.

On the other side, Indonesian nationalist that oppose to Papuan self determination rights often see native Papuans’ genuine discontent as an indication of resistance towards the government, and proof that they wish to separate.

What should the government do to ensure security and stability in Papua?

First, there’s no need to overreact. The Tembagapura case is likely to be driven by pragmatic interests of the parties involved.

Second, the government should balance their state security approach with human security. The safety and well-being of the people that are not directly involved in the conflict must be a priority irrespective of ethnicity and race between migrants or indigenous people.

Third, the government should build paths for dialogue and negotiation towards reconciliation in the long term. Gradually or simultaneously there should be a space for dialogue to prevent growing distrust between migrants and indigenous Papuans and between authorities and the public.

On August 15th, 2017, President Joko Widodo, religious and tribe leaders as well as Papuan human rights activists met at the presidential palace Jakarta. After the meeting, the Coordinating Minister of Politics, Legal, and Security, the president’s chief of staff and the coordinator of Papua Peace Network were appointed as the persons in charge to prepare dialogues on human rights and security issues in Papua.

Fourth, the local governments, must be proactive and work together with the police to restore security in the region.

Fifth, the three pillars of Papua (the local governments, Papua legislative bodies, and the Papuan People Council should work together to improve prosperity and welfare of all Papuans. (*)

Yahukimo, the entrance of gold miners to Pegunungan Bintang