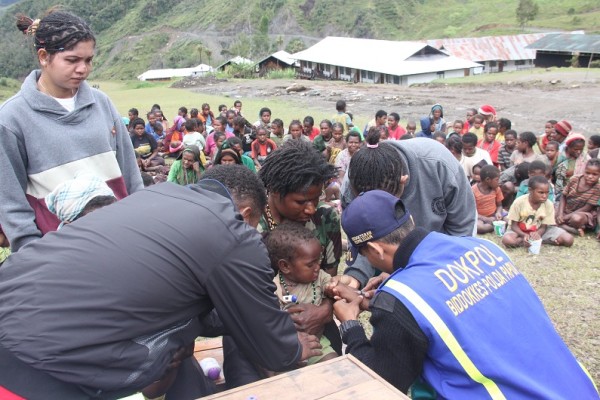 Wamena, Jubi – Eight community health centers in Nduga Regency are planning a mass immunization program that will be held at Mbua, Mbumuyalma and Dal sub-districts.

The head of the Health Problem Monitoring at the Nduga Health Office, Amad Lokbere, said on Friday (22/1/2016) in Wamena, Jayawijaya Regency that the program has been partially implemented in January and would be run until March 2016 that continue with the launching of National Immunization Week on a large scale.

“National Immunization Week would be held in March 2016 in Nduga Regency, and the event would be organized by Papua and Nduga health offices,” he said.

Meanwhile both provincial and regional health offices are still providing health service and treatment to recover the exceptional case of pertussis in Mbua sub-district.

“Nduga Regional Health Office has formed a team and we already went to the field in order to follow up this exceptional case in Nduga, we also have provided treatment there,” he said.

Earlier, the Papua Health Office Chief, Aloysius Giyai, said he has deployed a team to assist the recovery of pertussis patients in Mbua sub-district. The team has been departed on Wednesday (20/1/2016).

“It is the fourth time the team provide health service in Mbua sub-district. During the service conducted for two days on Thursday to Friday (21-22/01), the number of residents came for treatment are approximately 200, that are consisting of 70 toddlers and 107 adults,” he said. (*/rom)

PRACTICE OF PURCHASING A DIPLOMA IN JAYAPURA CITY STILL EXIST

A story of Ruth Dolly Pagawak, Papuan woman who recovered from Covid-19