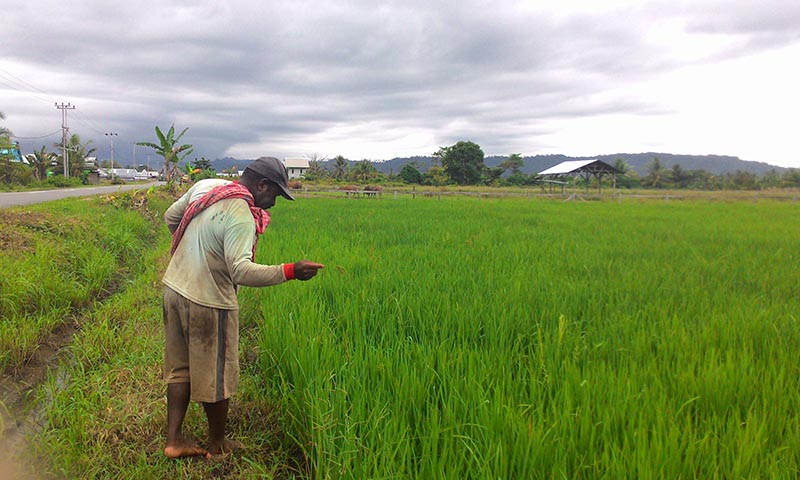 A farmer at the rice field in Nabire - Jubi/Titus Ruban

A farmer at the rice field in Nabire – Jubi/Titus Ruban

Nabire, Jubi – Nabire Regency plans to expand its rice fields up to 5974 hectares by March next year, an official said.

“2486 hectares for the target of April – September 2016 and it has only reached 1056 hectares. Because the target is until September 2016, less than 1430 hectares could be realized in next September,” said the Head of Nabire Plantation and Agriculture Office, Viktor Sawo to Jubi at his office on Tuesday (9/8/2016).

In line with its target, the Plantation and Agriculture Office has taken some measures to accelerate the preparations of planting, by working with some relevant agencies, including Nabire Public Works Office for river areas, Paniai 1705 District Commander, as well as army engineers detachment as partners.

“The coordination is related to the water supplies to support the acceleration of planting process, the irrigation office are willing to collaborate with us, from preparing the land until the phase of paddy growing,” he said.

The Head of the Irrigation and Watering Department of Nabire Public Works, Emanuel Sanggenafa said his office would support the program. “It’s given that Nabire has the potential of water, land while the motivation of paddy farmers is always growing,” he said. (Titus Ruban/rom)

DAU 2014, PAPUA THE HIGHEST IN INDONESIA