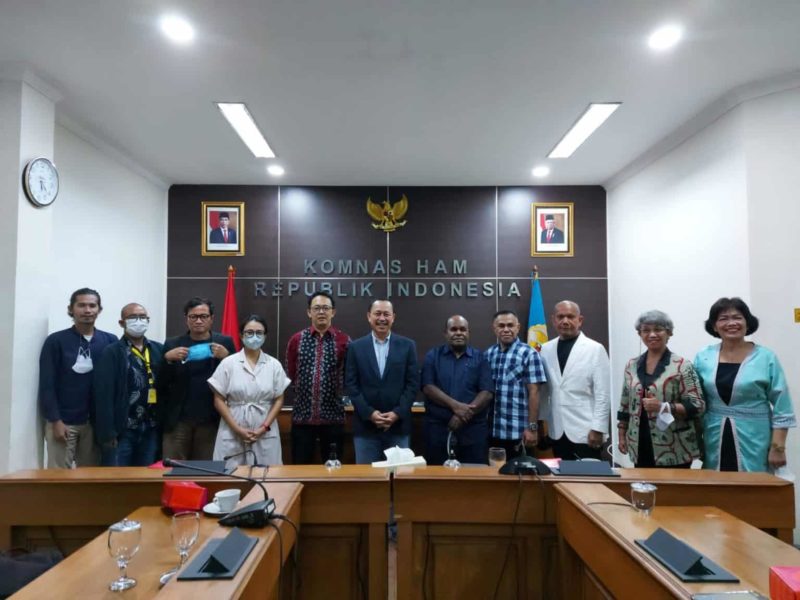 The visit of the Papuan People's Council to the Office of the Indonesian National Human Rights Commission in Jakarta, Saturday (12/3/2022). - Special

Jayapura, Jubi – The Papuan People’s Assembly (MRP) on Saturday, March 12, 2022, visited the Office of the National Human Rights Commission (Komnas HAM) in Jakarta. During the visit, the MRP conveyed various human rights violations in Papua that have not been resolved, and the central government and the House of Representatives’ unilateral policy to divide Papua Province into several regions.

MRP deputy chairperson Yoel Luis Mulait said in a written statement that his party also asked Komnas HAM to provide its opinion regarding the MRP’s request for a judicial review of Law No. 2/2021 on the Second Amendment to Law No. 21/2001 on Papua Special Autonomy (Otsus Law) at the Constitutional Court.

“Currently we are submitting a judicial review of Law No. 2/2021. The law was made without the consultation and participation of the MRP and Indigenous Papuans. The material of the law even weakens the rights of Indigenous Papuans. We ask the Komnas HAM to provide an opinion at the Constitutional Court,” said Mulait.

Komnas HAM chairman Ahmad Taufan Damanik said that in the near future, Komnas HAM would express its opinions regarding the rights violation of the Papuan Indigenous People as a result of the promulgation of the new Papua Special Autonomy Law.

Damanik said the material for the official opinion of the Komnas HAM would be discussed with a special team. “We will discuss with a special team regarding the second revision of the Papua Special Autonomy Law, the exclusion of the Indigenous Papuans in the making of the law, and material that violates the rights of the Indigenous Papuans within the framework of Papua Special Autonomy,” he said.

Amnesty International Indonesia’s executive director Usman Hamid said the new Papua Special Autonomy Law deliberation indeed did not involve the participation of Indigenous Papuans. “Therefore, we support the MRP’s objective during their visit to Komnas HAM. We ask Komnas HAM to participate in reviewing the central government’s policies which are the root causes of the violation of the rights of the Indigenous Papuans,” said Hamid.

“The second revision of the Papua Otsus Law negates the role of the MRP, abolishes the right to political participation through local parties, and rather favors entrepreneurs than Papuans. It is discriminatory, unconstitutional, and violates the political agreement contained in the Preamble of the previous Special Autonomy Law,” he added.

Hamid asked the Komnas HAM to not only investigate human rights violations but also find the root cause of the repeated violence. One of them is the inconsistency of the central government in implementing Papua Special Autonomy, as shown by its absence from carrying out the mandate to establish a Truth and Reconciliation Commission (TRC) and a Human Rights Court in Papua. (*)

6,000 Personnel on Standby to Safeguard President’s Visit to Papua

YAHUKIMO PEACEFUL AFTER THE MASS DISPUTE