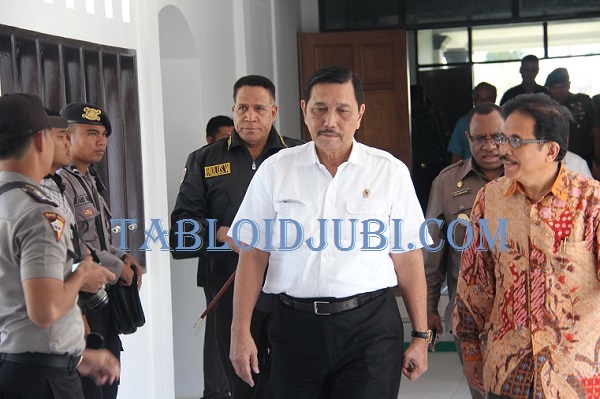 Wamena, Jubi – The government’s attempt to resolve alleged human rights violations through an integrated team formed under the Coordinating Minister of Political, Legal and Security Affairs must involve relevant parties.

“The victims should also deliver their aspirations as well as their families. They have rights to say several things to the minister, but the space has never been existed,” he said on Monday (20/6/2016).

“So, it should be raised from the victims about how to solve this human rights violation. So, this meeting actually could provide more times or wider space to each components. If KNPB, Customary Council or even OPM have chance to speak, if we were not involving them into this attempt we would be in deadlock,” said Hesegem in responding the meeting between the Minister of Political, Legal and Security Affairs with Jayawijaya leaders at the Regent Office on Friday (17/6/2016).

In this meeting, Minister Luhut Binsar Panjaitan admitted about rejection against his investigation team. But it was only few people. According to him, the team is consisting of the Chairman of both National and Provincial Human Rights Commission and several human rights commissionaires.

“I can tell everyone can look on the existing document, while the journalists also could be included in this team, so that this could be well settled, but better come with data not rumors. What we wanted is no group to from independent team to investigate us,” he said in Wamena, Jayawijaya.

He admitted so far the current process is collecting the data, because from the meeting in Jayawijaya it founded many police officers and military personnel have become the victims, therefore he considered it is not fair if the problem was only solved for the civilians.

On the same occasion, Papua Police Chief Inspector Paulus Waterpauw explained the cases of severe human rights violation that become their focus are the cases of Wamena, Wasior and Paniai. National Human Rights Commission and General Attorney would handle all cases.

Earlier the minister’s visit, the Chairman of Papua Legislative Council Yunus Wonda has doubted the minister’s investigation team in solving the human rights violations in Papua. Because he thought this team is not independent.

“Though the government’s team has data, but I am not sure if any countries could trust on it,” he said.

He expected the resolution of human rights issues is carried out by an institution that supposed to work for it, namely National Human Rights Commission.

At the beginning of the establishment of this integrated team, Papua Governor Lukas Enembe expressed his disappointment towards this attempt by the Coordinating Minister of Political, Legal and Security Affairs because it still argued about the criteria and definition of human rights violations.

“If it’s still arguing about the criteria and definition, it’s better giving back to Papua, so it could be resolved by the customary law,” he said after the closed meeting in the last April with the Coordination Minister of Political, Legal and Security Affairs along with the Chairman of Papua Legislative Council and Chairman of Papua People’s Assembly. (Islami Adisubrata/rom)

Out of 60 candidates for Komnas HAM commissioners, only 19 with very good competence