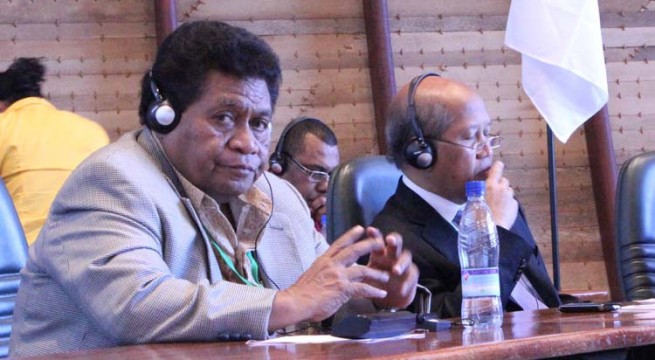 If they think I am qualified…yes, please, but if not, don’t,” Manufandu who was also former Indonesian Ambassador for Columbia told reporter related the question on the issue of PT Freeport Indonesia CEO must be indigenous Papuan.

Further Manufandu who’s also a senior advisor of President Joko Widodo on Papua issue said being a CEO of the largest gold mining company in Indonesia should not only have professionalism or experiences in the field practiced, but also the ability of high technological and managerial.

“Have the extensive knowledge as well, understand the economy including mine,” said Manufandu.
Earlier, two weeks ago, Papua Youth Council held peace rally in front of Papua Governor Office demanding the Provincial Government that PT Freeport Indonesia CEO must be indigenous Papuan.

Cenderawasih University Rector Dr. Onesimus Sahuleka also said it was time for the American base company to give credence to indigenous Papuan to occupy the vacant position after the resignation of former CEO Mar’oef Sjamsudin.

“I said it is the time for the indigenous Papuans to take a lead on Freeport because they have the good capacity, quality and integrity,” he said. (*/rom)

One Person Shot by Unknown Gunman in Keerom