Member of a TNI defendant for burning scriptures’ case was fired 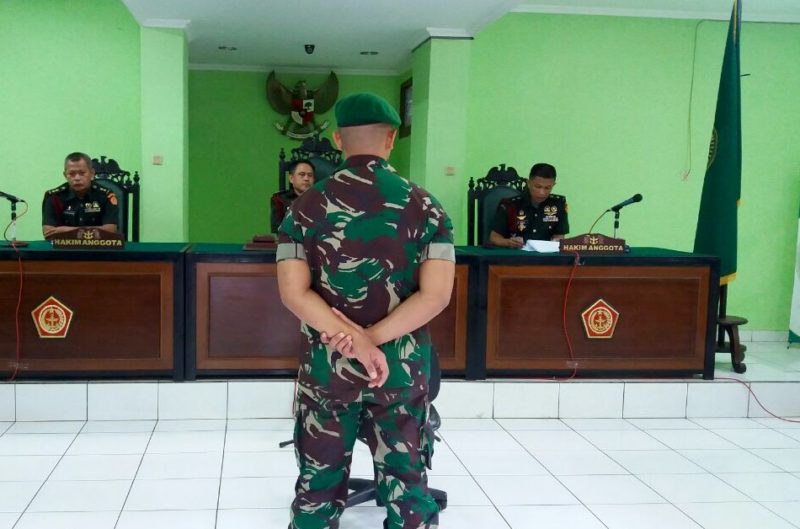 Judges were reading their verdict at Military Court III-19 Jayapura, Thursday (September 28), on the case of burning scripture - Jubi/Arjuna

Judges were reading their verdict at Military Court III-19 Jayapura, Thursday (September 28), on the case of burning scripture – Jubi/Arjuna

Jayapura, Jubi – Judge of Military Court III-19 Jayapura convicted a member of Yonif 410 / Alugoro Army, Serda Bangun Ahmad Kasmawan, a defendant of scriptures burning case in Kasrem 172 / PWY complex, Padang Bulan, Jayapura City, Papua, on May 25, 2017, with a sentence of two years and six months in prison, withheld the period of detention, and dismissal from the army unit.

“The defendant proved legitimate and convinced that he was guilty of blasphemy, the defendant was sentenced to two years and six months imprisonment and was dismissed from the army,” Colonel James F Vanderslot said when reading the verdict.

The panel of judges ordered the defendant to remain in custody and charged to pay a trial fee of Rp15. There were several considerations that the judges handed down the defendant more heavily to the defendant, than the military prosecution demands only 12 months imprisonment, withheld the period of detention.

The consideration among these is the defendant’s actions contrary to the propriety and feasibility of a TNI soldier. Moreover, the defendant who performs the border security task of RI-PNG is the chosen soldier, so that must be given strict sanction, so as not to repeat his actions and not followed by other soldiers.

“The aggravation of the defendant damages the image of the TNI in the eyes of the public,” said Colonel James.

After reading the verdict, the judges give the defendant the choice, whether to accept the verdict, refuse the decision and make an appeal, or think.

After consulting his legal counsel, the defendant expressed his thoughts. But the presiding judge reminded the defendant only seven days to think. If at that time the defendant does not exercise his right, it is deemed to have received the verdict.

Besides the defendant and his legal counsel who was thinking with the judge’s verdict, the military prosecutor also stated the same thing, for the reason that the verdict did not match the demand.

After the hearing, Pdt. Dora Balubun of the Synod of the Evangelical Christian Church (GKI) in the Land of Papua thanks to the judges for the verdict.

“For us, justice has to be upheld, the law is still enforced, so that in the future it will no longer happen in Papua and elsewhere,” Pdt said. Dora Balubun.

Head of Komnas HAM office of Papua Representative, Frits Ramadey, said the judges’ decision will consider public justice, because the defendant is not against certain religious people, but the public.

“This is good enough, so that in the future similar cases will no longer occur, because it can harm religious tolerance. This is not a matter of a particular religion, but for a sense of public justice,” said Frits. (*)

Education and health services in Ngguti – Merauke Regency not running